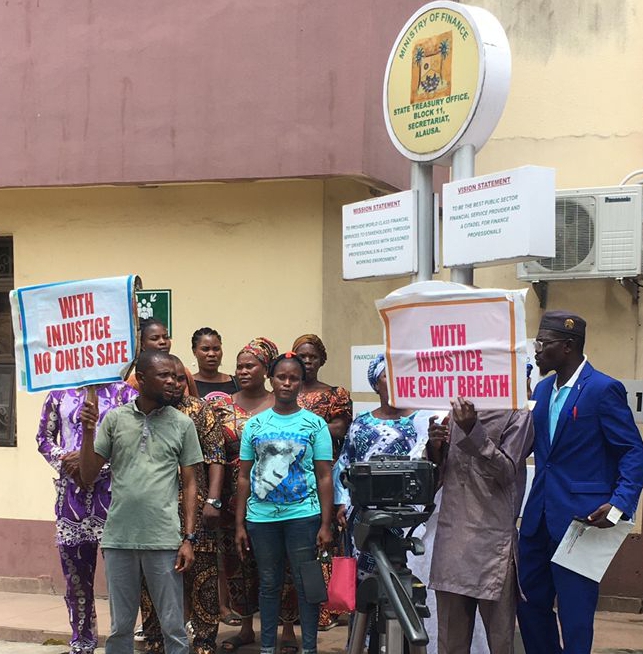 Com. Buna (Right) Leading Representatives of The Affected Communities during The Protest

A rights group, Human Rights Monitoring Agenda (HURMA) has called on lagos State government, to immediately suspend it’s proposed payment of enumeration and compensation to some indigenes of Epe Communities, whose lands were taken over for public use, alleged impostors.

HURMA in a petition to signed by its Executive Director, Comrade Buna Olaitan Isiak, and addressed to the Lagos State Government, It’s Accountant General and Commissioner for Finance, stated that those whose names, signatures and account details were submitted, are not the true and authentic representatives of the communities.

HURMA also stated that it is ready to involve the anti-graft agency, the Economic and Financial Crimes Commission (EFCC) to observe any financial fraud overtly or covertly on the matter.

HURMA’s appeal was premised on a Save Our Soul (SOS) letter received from the inhabitants of Eyin-Osa, Abomiti and Yeguda communities, whose ancestral lands were taken over by the Lagos State government.

HURMA’s appeal letter captioned: “Request For Withholding Of Payment On Enumeration And Compensation For Affected Communities Of Eyin-osa, Abomiti and Yeguda in Epe”, reads, “We have been authoritatively informed that Lagos State Government is about to disburse payment for compensation to the people of affected communities in Row but unfortunately the accounts and the signatories are not the authentic representatives of the community, they imposters and unauthorized people who may end up diverting the fund and defrauding the people.

“The Human Rights Monitoring Agenda upon receiving the S.O.S from the affected people, hereby appeal to Governor Babajide Sanwo-olu, to direct Accountant-General of Lagos State, from withholding the payment pending the resolution of the matter amicably and identification of the authentic representatives.

“We are however ready to involve EFCC in case of any observation of financial fraud overtly or covertly on the matter.

“We however appreciate the genuine and good intention of the Lagos State Government in ensuring that justice is done on the matter. May God continue to strengthen our Governor Babajide Sanwo-olu and bless Lagos State abundantly.”