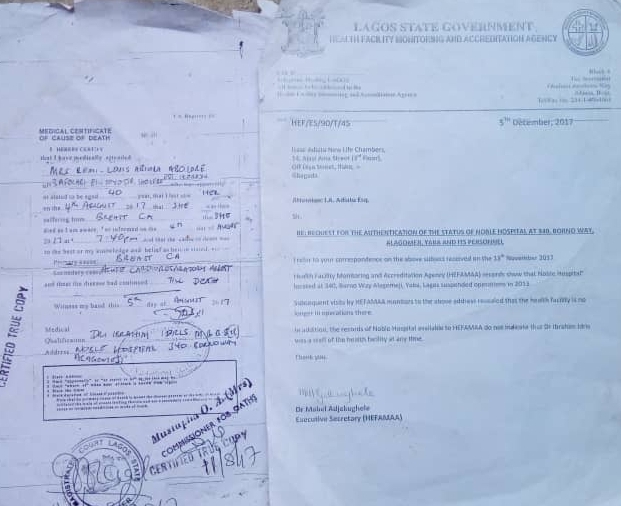 In furtherance to the controversies trailing the absolving of one Otunba Olusegun Ashogbon and five others suspects linked to the mysterious death of late Mrs. Abolore Remi-Loius, by the Lagos State’s Directorate of Public Prosecution (DPP).

The new controversy arose from the ‘Death Certificate’ issued by a health facility, Noble Hospital, located at 340, Borno Way, Alagomeji, Yaba, Lagos, allegedly relied on by the DPP to absolved all the six suspects linked to the death of late (Mrs) Remi-Louis.

Late Abolore Remi-Loius, was said to had abandoned her matrimonial home on April 27, 2014, despite having subsisting legal marriage to Mr. Remi-Loius and allegedly eloped with Otunba Ashogbon also known as Ttilayo Oladimeji, an indigene of Owo, Ondo State.

Ashogbon was said to have confessed to the Operatives of Nigeria Police Force, after the deceased’s car was found in his possession, at the scene of the woman’s death.

The car was said to had been recovered from him (Ashogbon) and returned to Mr Remi-Louis, after which the suspects’ case file was sent to Lagos DPP for legal advice, to unravel the circumstances surrounding the deceased death and the roles played by each of the suspects.

Though, DPP through its three directors, Ms. Titilayo Shitta-Bey, who is now a Permanent Secretary and Solicitor-General, another ones by Dr. Jide Martins and Y. G. Oshoala respectively, had in three different ‘typographical errors’ legal advice, as claimed by them, absolved all the six suspects of murder charge against them.

In two different legal advice signed Ms.. Shitta-Bey (M.S) and Dr. Jide Martins, alleged to have affirmed that the deceased was said to be receiving treatment at LASUTH after being buried, (last seen by her in August 2017 and later changed to 2018).

One of the documents allegedly relied on by the DPP in setting the suspects free of the allegations was the Death Certificate said to have been issued by Noble Hospital.

Dissatisfied with the DPP’s three Legal Advice, the complainant, Mr. Remi-Loius, through his counsel, Mr. Isaac Adiatu of Newlife Chambers, approached Lagos State Health Facility Monitoring and Accreditation Agency (HEFAMAA) in a letter dated November 10, 2017 and received on November, 13 2017, respectively, to ascertain the existence of the health facility and the doctor the issued and signed the death certificate.

HEFAMAA in its reply to the complaint’s enquiry, dated December 5, 2017 and  signed by its Executive Secretary Dr. Mabel Adjekughele, had stated that thus: “Noble Hospital located  at 340, Borno  Way Alagomeji, Yaba, Lagos, suspended operation in 2013. Subsequent visits by HEFAMAA monitors to the above address revealed that the health facility no longer in operation there “.

HEFAMMA’s letter stated further that “the records of Noble Hospital available to HEFAMAA do not indicate that Dr. Ibrahim Idris was a staff of the  health facility at any time”.

The complaint had on August 11, 2017, obtained copy of the Certified True Copy (CTC) of the  Death certificate, amongst other documents, submitted by Alhaja Modinat Olayemisi Olusesan (deceased mother) who had stood surety for Ashogbon and deposed to an affidavit  claiming that Ashogbon is his son-in-law, in another Criminal charge against  Ashogbon, which Mr. Remi-Louis had alleged to be lying under oath against her used to plead to vacate the Bench Warrant issued against her, the daughter and Alhaja Sarat Sikiru Abinuwaye (deceased’s), Olayemisi Olusesan who stood surety to Alhaja Modinat, at Magistrate Court 15, Igbosere, before her Honour J O A Adepoju (Mrs).

This was sequel to the cross petitions written by Mr. Remi-Louis against Ashogbon who also bears Titilayo Oladimeji, who had initially written a petitioned to a former IGP on the November 12, 2015, against the complainant.

Ashogbon who is now facing trial for perjury in the same court, arising from the false allegations he made in his initial petition dated November 12, 2015, through Lagos State Ministry of Justice, Public Advice Centre, against the complainant.

The complainant was said to had relied on copy of the Certified True Copy obtained on August 11, 2017, of the purported Death certificate dated August 5, 2017, to write petition to State Criminal Investigation SCID Panti Lagos dated September 21, 2017, to have raised another round of allegations.

The complainant was said have insisted that Lagos State DPP have colluded with both the FCID and the suspects, having former used its instrumentality of Office to absolve all the suspects in the face of cogent relevant documentary evidence confirmed by another only competent Health Agency, HEFAMAA in the  Ministry of Health, Lagos State.

In a  letter requesting for review by  the  complainant, dated 7/8/2019, through his Lawyer, he had expressed deep reservation about the integrity of  the  Legal Advice signed by T .K .Shitta Bey (M. S), the current Solicitor General of Lagos State Ministry of Justice.

Also the same reservation had been expressed about the reply signed by Dr. Babajide Martins, as a Director of DPP , before Mr. Y. G. Oshoala, successor to Dr Martins, the current Director, who admitted to have regretted dates indicated and mistakes and errors, but audaciously turned round to say that the Legal advice issued was final, a Lawyer maintaining  two opposing positions on the same matter.

The development which made the complainant to described the senario as a “well orchestrated outright disregard for the principle of the Rules of Law by the DPP and gross abuse of office with impunity, in order to justify subversion of Justice in the Lagos State Ministry of Justice”.