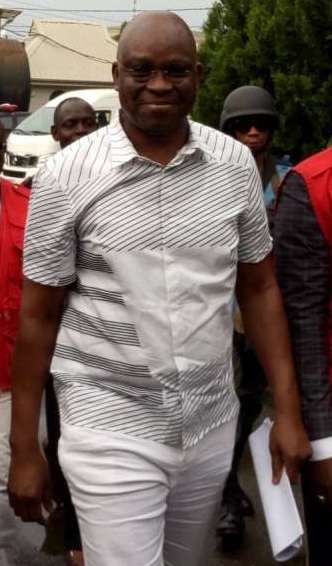 ‘How Fayose’s Aide, Agbele, Use Woman’s Name To Change N135m To Dollars  -Witness

Jamilu stated this while being led-in-evidence by the prosecutor, Mr. Rotimi Jacobs (SAN), at the continued trial of Mr Fayose, who is standing trial before the court presided over by Justice Chukwujekwu Aneke, on Tuesday.

Fayose alongside his company, Spotless Investment Limited, are standing trial before the court on charges bordering on alleged conspiracy, breach of trust, theft and money laundering.

He also was accused of receiving $5  million from a former Minister of State for Defence, Musiliu Obanikoro.

The offences according to the Economic and Financial Commission (EFCC) contravened sections 15(1), 16(d) and 18(c) of the Money Laundering Prohibition Act 2011.

Mr Fayose was granted bail on October 24, 2018 after pleading not guilty, when he was first arraigned before the court, on October 22, 2018.

At the resumed trial of the defendants on Tuesday, Jamilu who was the 10 witness to testify in the matter while being led by Mr. Jacobs (SAN) said: “sometimes in 2015, my bank called me that EFCC had blocked my account, later, I was called by the Abuja office of EFCC, where I was asked about N135 million from Depravateer Nigeria Limited came into Kofa Micer Investment Limited account.

“I was asked asked about the payee. As at that time, I don’t know who paid the money, when I got back to the office I was told that one Mr. Agbele who earlier told me that he is Mrs. Ibi, it was later I know him as Mr. Agbele.

When further asked of what happened on August 20, 2015, Jamilu responded and said: “another N47 million; N40 million and N14 million into his account. Also Mr. Abiodun Agbele gave me N1 million USD and as at that time I paid him total of N208 million equivalent to N1 million.

During cross examination by counsel to Fayose, Mr. Ola Olanipekun (SAN), the witness said he remembered telling EFCC that ‘its Mrs. Ibi that sold the dollars to me and that Mrs. Ibi sell and buy dollars to me”.

When asked if he can confused Mrs. Ibi for any any other name? He replied and said: “I can’t confused Mrs. Ibi’s with another person. I didn’t mention Agbele’s name in my first statement dated to the EFCC”.

Jamilu however told the court that he came to know that Mrs. Ibi that have been speaking with him was Mr. Abiodun Agbele, through a truecaller.

He also told the that he did not give his record book to the EFCC and that there was no any transaction with the first defendant (Fayose).

The witness also  told the court that he can not mistaken Abiodun Agbele, Mrs. Ibi and Depravateer for each other, as they are different names. Adding that during his interrogation at the EFCC, he did not meet Abiodun Agbele.

Another witness, Mr. Imisi Ilesanmi, a former Relationship Manager with Zenith Bank Plc,  in his evidence told the court how the sum of N132. 5 million, on January 30, 2015, was transfered from the account of a company, Samcheles  Nigeria Limited, to a company account with First Bank .
During cross examination by Mr. Olanipekun and Ojo, both (SAN), the witness told the court that he did not come across any transaction involving Mr. Fayose and that there was no any instruction from Samcheles Nigeria Limited involving him.

He also told the court that he did not come across any transaction between Shamcheles’ and Spotless Investment Limited. Adding that there was no any inflows from Ekiti State government to Samcheles account before 2006.

Further hearing to the matter has been adjourned till December 4, 2020.