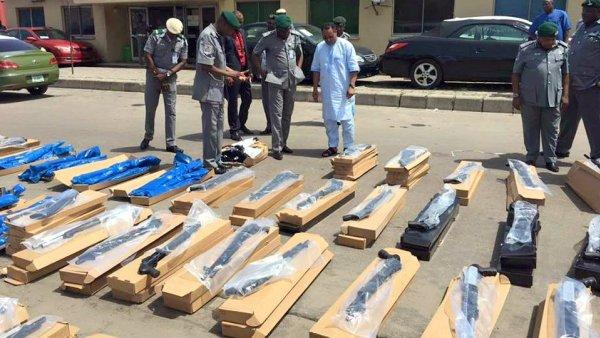 Justice Ayokunle Faji of a Federal High Court, Lagos, today, dismissed no case submission, filed by a retired Customs Officer, Hassan Mahmud and two others, who are standing trial before the Court on illegal firearms smuggling 661 Pump Action Riffles into the country.

The third defendant in the charge, Oscar Okafor, did not file no-case-submission.

Justice Faji however acquitted and discharged the fourth defendant in the charge, Donatus Ezebunwa, who was represented in the matter by Mr. Okey Barah.

The office of Attorney-General of the Federation (AGF) had dragged all the defendants before court on a nine count-charge bordering on conspiracy, smuggling of prohibited firearms, forgery and altering of documents, offering of graft to government officials and importation of prohibited of 661 pump action rifles.

The offences which according to the prosecutor, Mr. Julius Ajakaiye, a Deputy Director in the Federal Ministry of Justice, are contrary to  to and punishable under sections 3(6),1(14)(a)(I) 1(2) of the Miscellaneous Offences Act Cap. M17, Laws of the Federation of Nigeria, 2004. And section 98(1) (b) of the Criminal Code Act.

All the accused persons except Matthew Okoye, who is said to be at large, were first arraigned before the court on June 14, 2017, on offences.

They had all pleaded not guilty to the charge, but the court while cited plethoras of authorities and concluded that ‘the charges against the defendants bothers on national security’, dismissed their bail applications and ordered that they be remanded in the custody of Nigerian Correctional Services.

Not satisfied with Justice Fajis decision, the defendants approached Court of Appeal, still, their applications for bail were equally dismissed. Hence they have been in custody since June 14, 2017.

During the trial of the charges, the prosecutor, Mr. Ajakaiye called nine witnesses, who told the court roles played in arresting the alleged arms smugglers, as well as tendered several exhibits, which were marked as exhibits ‘A to R’.

Upon conclusion of prosecution’s case on March 25, 2019, all the defendants opted to file no-case-submissions. The prosecution also filed a counter, urging the court to dismiss the application and to order the court to open their defence.

Both applications were heard on December 15, 2019, while ruling was reserves till today.

Delivering ruling on the defendants’ No case submission today, Justice Faji held that the prosecution has successfully established prima facial case against the first, second and sixth defendants, who were Hassan Trading Company Limited, Hassan Mahmud and Salisu Abdulahi Danjuma on all the charges except count nine, which was struck out from the entire charge against all the defendants.

Justice Faji however, acquitted and discharged the  fourth defendant, Donatus Ezebunwa, of the allegations, on the ground that the prosecution did not successful link him to the charge of offering a bribe to the Customs Official.
In dismissing the defendants’ no-case-submission Justice Faji held that: “the prosecution by the evidence of the witnesses has successfully established prima facial case against the first, second and sixth defendants in counts one, two, three, four, five, six, seven and eight.

“Count nine itself is hereby struck out as regards first, second, third and sixth defendants only. And third defendant haven’t not file no case submission.

Further hearing on the charge has been adjourned till February 21, 26, 27 and March 4, for opening of defence.

AGF had in a charge number FHC/L/190c/17, alleged that the all the accused persons conspired with one another to illegally import into Nigeria 661 Pump Action Rifles.

In particular, the one of the Customs Officials, Mahmud Hassan, was alleged to corruptly offered the sum of N400, 000.00, to one Aliu Musa, the Examination Officer of the Federal Operation Unit of the Customs Service with an intent to prevent hundred percent search on a container marked PONU 825914/3, which was used in bringing into the country the said arms.

Mahmud Hassan was also alleged to have corruptly gave the sum of N1 million to Government officials at Apapa Port, through his colleague, Danjuma Abdulahi, in order to prevent the searching of the said container used in bringing in the 661 illegally imported Pump Action riffles.