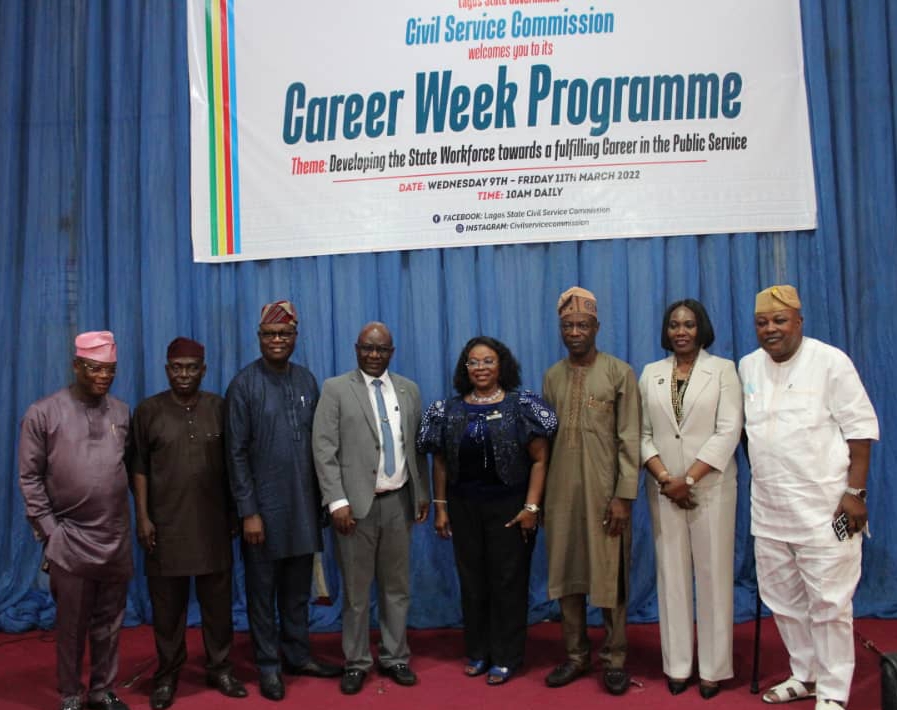 The programme, with the theme “Developing the State Workforce towards a fulfilling Career in the Public Service”, according to Mr. Dunkwu Divine, the Commission’s Public Affairs Officer,  being the first of its kind to be organized by Commission, was premised on the need to bridge observed gaps in Human Resource Management and build capacity of officers for enhanced productivity.

The Commission’s chairman, Mrs. Olubunmi Fabamwo, in her welcome address at the event held at the Adeyemi Bero Auditorium at Alausa Ikeja, last Wednesday, said that the Commission has continued to centre its activities on creating a competent and motivated workforce that is disciplined and productive.

Mrs. Fabanwo noted that in the last two years since the inauguration of the present Commission Members, a number of innovative programmes and activities had been introduced, stating that the “Career Week Programme” which is yet another initiative of the Commission, was a product of keen observations.

She stateed that the programme was designed as a platform to sensitize and enlighten Civil/Public Servants on the ground rules, regulations, processes and procedures that guide their career management and development.

The Chairman noted that the essence of the Programme is to ensure Public Servants who are the ‘Engine Room’ of Government, are well-informed and grounded for effective and impactful service delivery.

Mrs. Fabanwo, while welcoming participants to the programme, thanked the Lagos State Governor, Mr. Babajide Sanwo-Olu, for his constant support to the Civil Service Commission, which she reiterated was a statutory body in every State of the Federation with clearly defined roles enshrined in the Constitution.

elivering a Goodwill Message at the event, the Chairman, Lagos State House of Assembly Committee on Establishments, Training and Pensions, Honourable Yinka Ogundimu, restated the support of the House of Assembly to initiatives that would help engender a virile and efficient Public Service.

The Lawmaker, while commending the Civil Service Commission’s initiative, underscored the need for the Commission, to ensure adequate dissemination of information about its activities as it affects every civil servant.

He implored the leadership of the Commission not to limit the programme to top Government officials and senior officers alone, but to expand the reach to staff in the middle and lower level grades, in order to enlighten them and build their capacity.

Declaring the Career Week open, the Lagos State Head of Service, Mr. Hakeem Muri-Okunola, who also was Special Guest of Honour at the event, commended the Commission’s chairman, Members and entire Management of the Civil Service Commission for the Career Week Programme initiative.

The Head of Service, who was represented by the Permanent Secretary, Public Service Office, Mr. Samson Ajibade, noted that the Career Week marks a distinct milestone in the State Government’s effort at continuous sensitization of its workforce on salient issues in a bid to maintain a vibrant and virile Public Service.

On her part, the Permanent Secretary, Civil Service Commission, Mrs. Boladele Dapo-Thomas, informed that the programme, which was initially proposed for last year could not hold because of the need to comply with the prevailing Covid-19 protocols at the time.

While charging participants to take advantage of the programme, she informed that the Commission in the course of carrying out its statutory responsibilities observed a seeming dearth of deep knowledge and understanding of the Public Service Rules, Schemes of Service and Extant Provisions that regulate the Human Resource ecosystem of the Service by most Civil/Public Servants

She also said that it is in the bid to address this concern that birthed the Career Week Programme and disclosed that a unique component of the Career Week activities is the Career Clinic, where specific career challenges of staff would be addressed.

The Permanent Secretary also stated that the Programme would be sustained as an annual event, adding that the next edition would be expanded to accommodate more Public Servants.