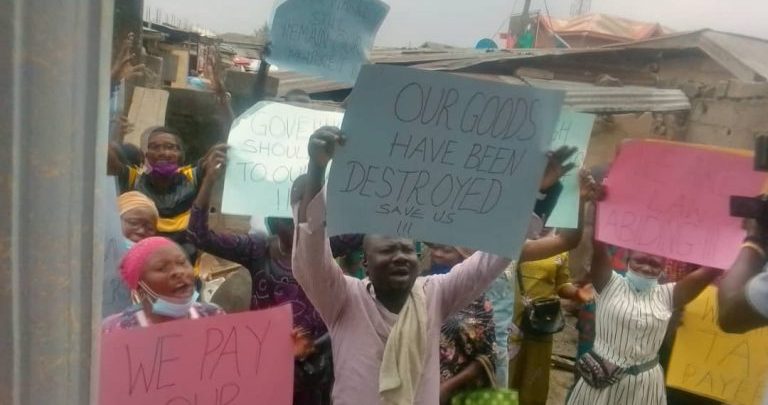 Planks and building materials traders at Oja-Oba, at Isheri-Olofin in Egbe-Idimu Local Council Development Area of Alimosho Local Government, Lagos State, have appealed to Governor Babajide Sanwoolu, to restore them back to the market.

The traders, under the auspices of Planks and Building Materials Dealers Association, made the appeal on Tuesday, during a press conference, when they lamented illegal and unconstitutional way in which they were injected from the market, by a land grabber whom they said enjoyed the backing of the LCDA  coumcil boss, Monsuru Olowoopejo.

The traders also alleged that apart from being unconstitutionally ejected from the market, their leaders and some others were arrested and subjected to inhuman treatment by the police Command in the area.

Oja-Oba planks and building materials market, was said to have been demolished while goods worth millions of Nair were destroyed, after the traders were given a week to leave, by the lawyer to the land grabber, whom they said is a Prince to an Oba in the area.

They also claimed that some of them who attempted entering the market to salvage their goods during the demolition, were beaten to stupor by land grabber’s armed thugs.

The traders, who armed themselves with placards of different inscriptions, such as: “we are Citizens of Nigeria”, “we pay our local government permit”, “our market still remains ours”, “save our souls from land grabbers”, “save our market from destruction”, “Lagos State government, come to our rescue”, and others

Comrade Ajibola Owodunni Ganiu, the Vice President of Lagos State Planks Market Association, who narrated how tje members of the association acquired said the land for market from Idimu LCDA some years ago with approval.

He said that the traders started their businesses and were paying all the necessary fees due to the LCDA until recently when a developer, through his lawyer, brought seven days quit notice and ordered them to vacate from the market.

They contacted the State Ministry of Agriculture, which is in charge of the market and was looking into the matter before the developer wrote a petition to the Police at Area M and three of their leaders were summoned but later released on bail.

He said while the matter was being resolved by the Area Commander, some thugs were sent to the market, who destroyed their goods and fenced the whole market. Comrade Ganiyu said when they got back to the Area Commander, he referred them to the Ministry and Idimu LCDA insisting that it was a civil matter.

He said since then, they have not accessed the market, while traders including him received serious beating and they were taken to hospital for treatment.

Also speaking on the development, Akanni Peter, the Association’s Task Force Chairman, described the of the land grabber, the LCDA and the police in destroying the traders’ livelihood.

A trader in the market, Mrs. Victoria Babatunde, while appealing the Governor Sanwoolu to restore them back to the market, lamented that since the market was illegally demolished, many of them have been living from hands to mouth.

She therefore urged the Governor, as a meter of urgency, to set up panel of enquiry to the land grabber’s illegal and and restore them back to the market.

In the same vain, the action of the land grabber has been condemned by a human rights group, Centre for Human and Socio-economic Rights (CHSR), which equally called on the State government to intervene on the matter.

CHSR President, Comrade Alex Omotehinse, also has called on State Governor to caution the Idimu LCDA for impunity by giving out the market to developer with just seven days notice before invasion by thugs.

He explained that the right of the traders must not be breached and it was criminal for LCDA to have connived with land grabbers to deprive the traders from doing their business. He said that he has notified all the relevant agencies in the State Government to ensure that the market was restored to the traders.

Comrade Omotehinse also blamed the Police to not have intervened over the invasion of the market, which he claimed they might have done due to inducement .

Efforts to speak with the council chairman, Mr. Monsuru Olowoopejo, did not yield positive result, as he was not in the office when this medium visited him and his phone number given by one of his aides didn’t go through.