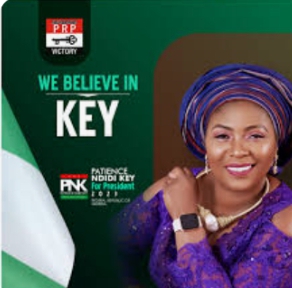 A lawyer and human rights activist, Mr. Yakubu Eleto, has called on the leadership of Peoples’ Redemption Party (PRP), to within 24 hours to declare Dr. Patience Ndidi Kay, as the winner of the party’s presidential primary election held on June 5, 2022, without further delay.

In the alternative, the lawyer asked the party’s leadership to order a fresh primary election, where all aspirants will be given a level playing ground.

Eleto, who described the party’s presidential election which produced Kola Abiola, the son of the presumed winner of June 12, 1993 General Election, as “Gross manipulation and severe illegality deliberate skewed the at the only female presidential aspirant”, the above request in a statement signed by his Head of Litigation, by Osaruese Agboghoighoin, and emailed to newsdishng.com, today.

The accused the party’s leadership of acting contrarily to the Constitution of the Federal republic of Nigeria (as amended), the Electoral act and laws guiding the party, as many states’ Chairmen openly affirmed to the delegates that Mr Kola Abiola was a consensus candidate of the party. Adding that the figures in the result sheet were tampered with in favour of Kola Abiola to the unfair disadvantage of Patience Ndidi Key.

The lawyer’s statement reads in parts: “this press release has become crucial in view of the gross manipulation and illegalities occasioned against Her Excellency, Dr (Mrs) Patience Ndidi Key, the only female presidential aspirant of the Peoples Redemption Party (PRP) at the party’s presidential primary elections which took place all over the Country on the 5th of June 2022.

“Ordinarily this press statement would not have been issued if the Party elders and stakeholders had properly handled issues appropriately internally and particularly internal democracy had reigned supreme in the primary election held on the 5th day of June 2022.

“Gone are the days of oppression and injustices based on gender, tribe, or the size of one’s pocket, and this is the reason for challenging the despicable acts of some of the party leaders. They have chosen to feign ignorance, despite manifest proof that the purported winner of the primaries (MR KOLA ABIOLA) the son of Late (Chief) M.K.O Abiola did not win fairly or squarely, and Dr (Mrs) Patience N. Key was unacceptably short-changed in the said primary elections.

“Patience Ndidi Key has been a card-carrying member of the Peoples Redemption Party for several years and has been a valuable member of the party. Unlike other aspirants for the party’s Presidential primaries, she had made the most immense and valuable contributions to the party which resulted in the party’s accelerated growth and popularity in the Country and indeed all over the world.

“As a matter of fact, on the 5th of June 2022, the primary election of the Peoples Redemption Party was conducted all over the 36 states of the Country and the Federal Capital Territory, Abuja to determine who will fly the flag of the party as its Presidential aspirant in the elections of 2023. It is however rather unfortunate that there are overwhelming evidence including video footages to show that the elections were marred with illegalities and gross malpractices particularly to the detriment of Patience Ndidi Key, who was the most popular candidate and the only woman in the race. some of which are listed as follows: 1. Contrary to the Constitution of the Federal republic of Nigeria (as amended), the Electoral act and laws guiding the Peoples Redemption Party, many states’ Chairmen openly affirmed to the delegates that Mr Kola Abiola was a consensus candidate of the party.

2. The figures in the result sheet were tampered with in favor of this aspirant to the unfair disadvantage of Patience Ndidi Key. For example, in Yobe State, the accreditation process was completed with 38 delegates present out of which 23 votes were casted in her favor but her flawless victory was upturned as a result of the incorrect figures which were assigned to this illegally chosen candidate.

3. In furtherance of the attempt to impose the preferred aspirant, in other circumstances, the delegates were deceived to believe Patience Ndidi Key had withdrawn from the race

4. In certain places, the strategy was sheer intimidation of the delegates who are recognized as Patience’s Loyalists

5. In some vicinities, there is no evidence to show that the process was conducted in line with party guidelines.

7. The purported election was marred with manifest corrupt practices and not in compliance with the guidelines of the party.

“It is now rather shameful that a party whose basic principle promises equity and value for all has descended to the arena by engaging in severe injustices and lack of value for the voice of the people.

“We strongly advise that the party leaders retrace their steps by giving the rightful winner, Patience Ndidi Key the ticket she painstakingly gave her all to win and which she did win.

“We are therefore by this press release giving the party the next 24 hours to declare Dr Patience the winner of the primary election held on the 5th of June without further delay or order a fresh primary election where all aspirants will be given a level playing ground.”