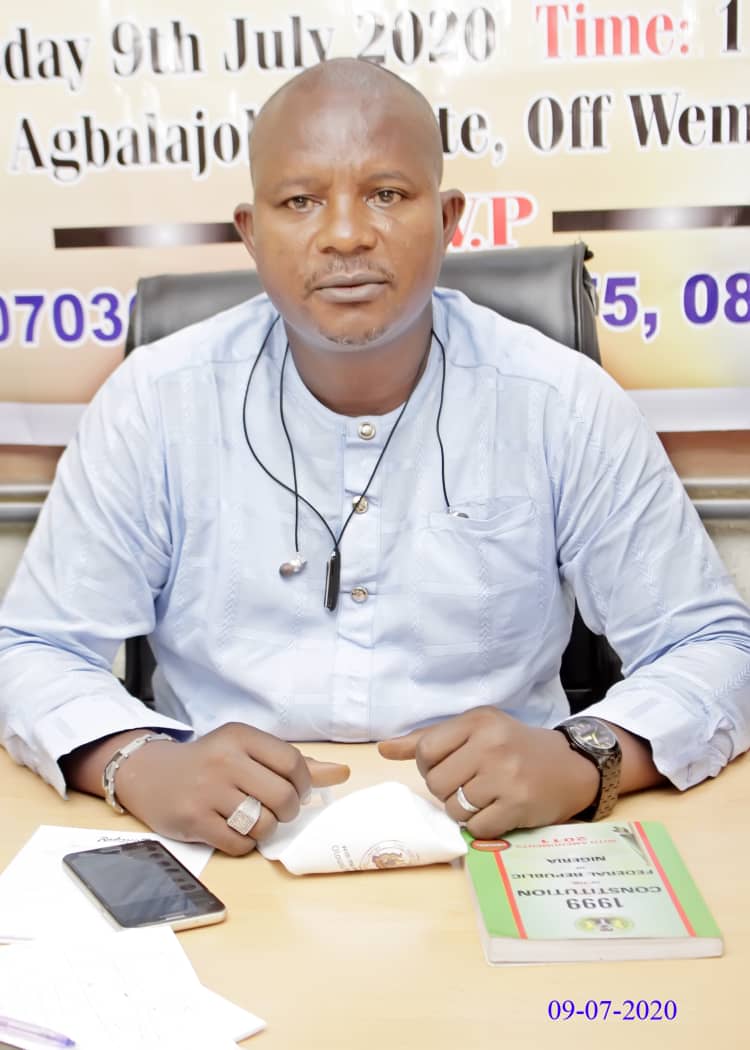 A rights group, Center for Human and Socio-Economic Rights (CHSR), has called on national leader of All People Congress (APC) Asiwaju Bola Ahmed Tunubu, to use his good office to prevail on the party’s executives in Lagos State, to ensure that the coming party’s primary election is less cumbersome, less risky to the peaceful coexistence of their areas and security of the State.

CHSR also advice that APC national leader to ensure that his party allows all the processes as stated in the State’s Electoral law and 1999 Nigerian Constitution, to prevail in selecting those that will represent the residents of the State at the Local Government Areas (LGAs) and Local Council Development Areas (LCDAs).

The admonitions were contained in a letter signed by the Center’s  President, Comrade Alex Omotehinse, to the APC national leader, which a copy way availed this medium.

Others copied with the letter are; the State Governor, Mr. Babajide Samwo-olu and the Speaker of the State’s House of Assembly, Right Honourable Mudashiru Obasa.

The Center’s letter reads: “Attention: Asiwaju Bola Ahmed Tinubu.
Your Excellency,
RE : FORTHCOMING LOCAL GOVERNMENT ELECTION AND OUR CONCERN ON SECURITY AND PEACEFUL PROCESS. The Center for Human and Socio-Economic Rights (CHSR) is a Non-Governmental Organization (NGO) registered as a corporate body to defend, sustain and promote the fundamental human and socio-economic rights of every Nigerians, as guaranteed by the Nigeria constitution.
The CHSR ally with other organization committed to an ideal Nigeria society founded on participatory democracy equity, fairness and social justice.

Over the years, the (CHSR) has given free legal assistance to victims of right violation while we have also worked with various government and non-governmental institutions in addressing culture, economic and social justice.

In view of our activities above, we write you on the above subject matter as we have observed with keen interest since the announcement of intention of the State to conduct election into the office of local government administration as entrenched in the Local Government Act of Lagos State as well as the electoral Act, 2010, as amended, couple with the provision of 1999 Constitution as amended that allows the state to conduct such election into the offices of the chairmen of the local government.

As a group and stakeholders in Lagos State, we consider such move as veritable and aplausible because it brings development  closer to the people at the grassroots and in accordance with the objective clause of our group we have not stayed aloof despite not being a card carrying members of any political party.

We believe that in doing the right thing, the right steps and process must be adopted not in accordance with the  party tenets, manifestos and constitutional provision but to the peaceful coexistence of the electorates both the party members and non party members alike.

In view of the above, our concerns have always centered on the process intends to use for the conduct of the election mainly from the parties in Lagos  especially your party, APC, being the ruling party in the State with ace to not only win the election but make it free, fair, peaceful and credible devoid of activities that will be inimical to the society at large.

Lagos has always been adjudged as the Center of Excellence and ‘numero uno’ in all facets of endeavors and we believe conduct of election into the local government administration shouldn’t be exception in it’s Excellency.

Based on our observations accross the state as a human rights group who have ears on ground and from the report we received from all our units and members spread across the State in all the local government and LCDAs, it is  imperative we inform you that any form of process of party candidate emergency that will involve large crowd of people may not be advisable as at moment and our concern and point of reference are premised on this listed indices.

Without prejudice to the provision of both Electoral Act and Constitution that provides how candidate to an election could emerge which are, by consensus, direct primary and indirect primary with the believe that such also feature in your party constitution, it’s obvious that not all the local government and LCDA where election will be conducted will have consensus candidates hence, your party being the ruling party will be left with no option than to adopt either direct primary or indirect primary.

We are of the opinion that the situation on the State may not favour the use of direct primary for now, the reasons are as follows:1. The fragile security situation of the State being an offshoot from the #Endsars Imbroglio of October 2020. This can be deduced from different security report weekly reeled out by the Commissioner of police, Lagos State to the effect that Lagosians be more vigilant so that we won’t allowed foreign body and unscrupulous elements to over run the State due to activities inimical to the peaceful coexistence of the state.

2. By law and Executive Order still on force in the State invoked due to the break out of Covid-19 pandemic, which states that gathering must not be more than 50 people at go and recently reinforced by the governor, it will be illegal to do anything contrary to that order as a responsible party the people hold your party to be and the ruling government in the state won’t want to be the breaker of their own law except it will be a case of the kings does no wrong. Since the Covid-19 has not been declared free of being infectious in  the society we can’t consider Lagos safe yet of the pandemic.

3. The activities of some of your party members and stakeholders in the State on their approach to the forthcoming election can’t be less that desperate and infused volatility. Some of their moves is that of winners takes all without consideration to the aftermath of their action if anything gone awry in the state, many are ready to distrupt, destabilize and dismantle as long as their candidates emerge. This moves we consider unhealthy to the fragile nature of the State security, except your party won’t mind to overstressed the security apparatus of the state which at best inadequate.

We are urging you sir, to use your good office and person to prevail on the party executive superintendent over the election guidelines and process leading to the primary to adopt the system that will be less cumbersome, less risky to the peaceful coexistence of their area and security of the state.

Since, consensus may not be the order of the day in all local government and LCDAs, which will leave no other option than primary, we will implore you to propose the indirect primary which will involved less crowded, security friendly and more efficient in the  emergence of candidates in the general election to the local government administration offices.

We believe as a critical stakeholders in the state, we must not wait until things gone comatose before we lend our voices rather we will play the role of prevention is better than cure advocates which necessitate the letter to your good office.

While we look forward to your response and favourable candor, we won’t shy away to criticise if admonition failed to elicit genuine response by using a process that will endanger the rights to peaceful coexistence of the residents as well as life threaten activities thereafter.
Please accept the assurance of our warm regards. Thanks.
Yours in struggleComrade Alex OmotehinsePresident, CHSR”.