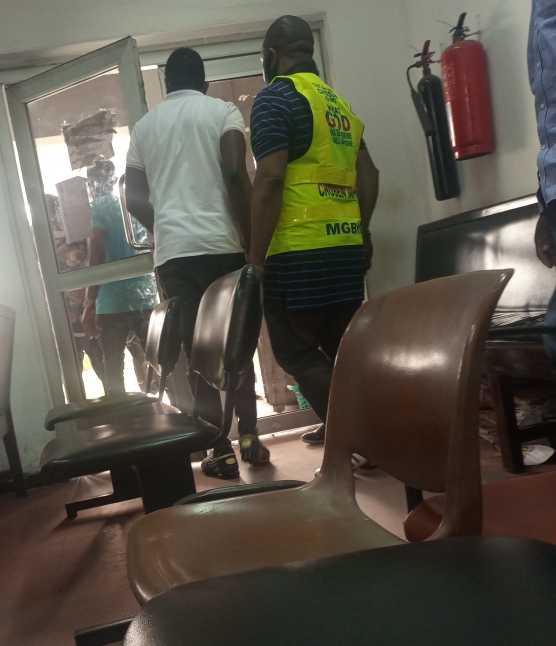 Osondu Christian, The Lord’s Chosen Member, Stepping Out Of Court After His Arraignment

A member of Lord’s Chosen Charismatic Revival Ministries, Osondu Christian and a Brazil Returnee, Okafor Okwudili Moses and three others, were today, arraigned by the National Drugs Law Enforcement Agency (NDLEA) before a Lagos Federal High Court, for unlawful dealing in total of 5. 75 Kilograms of combined hard drugs of heroin and cocaine.

The five defendants were arraigned in two separate charges.

Arraigning all the defendants today, the prosecutor, Mr. Abu Ibrahim, told the court presided over by Justice Daniel Osiagor, that Osondu and other three defendants, committed the offence between November 4 and 5, 2021.

He told the court that Osondu conspired with one Udeh Clement, both based in South Africa and smuggled in the said hard drugs. Adding that Osondu was arrested during inward clearance of Air Peace flight from Johannesburg, South Africa, at the E-Arrival Hall of the Murtala Mohammed International Airport, Ikeja-Lagos.

He also told the court that the trio of Udeh; Abanijo and Ihator conspired with both Udeh Clement and Chinedu Oseki (both based in South Africa) to distribute the banned drug in Nigeria.

The NDLEA prosecutor further told the court that the Brazil based Okafor Okwudili Moses, who was arrested on November 13, 2021, conspired with one Awuga, who also based in Brazil but now at large, to unlawfully import 2.55 Kilograms of cocaine.

He told the court that the offences commited by all the defendants, are contrary to and punishable under Sections 14(b), 11(a) and 11(b) of the National Drug Law Enforcement Agency Act Cap. N30, Laws of the Federation of Nigeria, 2004.

All the defendants pleaded not guilty to the charges.

With the defendants’ plea of not guilty, the prosecutor asked the court for a trial date and that they should be remanded in the custody of the Nigerian Correctional Services (NCoS).

But their lawyer, Mr. Benson Ndakara with two others, asked the court to admit them to bail in the most liberal terms.
Ruling on their bail applications, Justice Osiagor, admitted them to bail in the sum of N5 milion with one surety each.
The judge added that the surety who must be defendants’ relations, must have landed property within the Court’s jurisdisction.

The judge also ordered the defendant to always report at NDLEA’s office every three days before trial dates.

Justice Osiagor while adjourning the defendants’ trial till March 31, 2022, ordered that all the defendants be remanded in NCoS’ custody,till the fulfilment of the bail term.