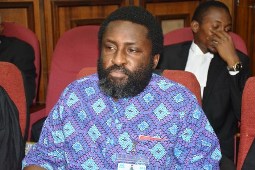 An Abuja based businessman, Babatunde Morakinyo alongside his company, Renocon Properties Development Limited, were today arraigned before a Lagos Federal High Court, for allegedly laundered the sum of $2. 290,70 million USD and N46 million respectively.

Both Babatunde and his company were arraigned of six counts charge offences  bordering on conspiracy and money laundering, before the court presided over Justice Rilwan Aikawa, by the Economic and Financial Crimes Commission (EFCC)

Arraigning the defendant and his firm in a charge marked FHC/L/94c/2020, the prosecutor, Ebuka Okongwu, told the court that the defendants committed the offences between December 2013 and April 2014, in Abuja and Lagos.

Ebuka old the court that the businessman while operating as Non Financial Designated Institution (NDFI) received the sum of $1 million each from Amni International Petroleum Development Limited and Lybott Capital Limited and $290, 703, from Xtract Energy Services Limited and laundered same for them through his bank.

Ebuka also told the court that the businessman used his company, Renocon Properties Development Limited, to allegedly laundered the sum of N16 million N30 million, for one Hauwa Musa Shahu, while also accused to have made single transfer of N30 million.

He was accused  carried out the transactions without report to the EFCC in writing, as specified under sections 5(1)(a) and 10 (1)(b) of the Money Laundering

The defendant pleaded not guilty to all the charges.

Upon the defendant’s not guilty plea, the prosecutor asked for a trial date and urges the court to remand him in the custody of the Nigerian Correctional Services (NCS).

Responding to the prosecutor’s request, lawyer to the defendant, Mr. Okechukwu Edeze, pleaded with the court for a very short date, to enable him file his client bail application.

Okechukwu told the court that he was only briefed of his arraignment on Saturday evening and flew in from Abuja  on Sunday. He therefore  pleaded with the court for short adjournment to enable him properly bring his bail application before the court.

Justice Aikawa, while conceded to the defendant’s lawyer’s request, adjourned till tomorrow for hearing of the bail application, while adjourned till October 15, for trial.