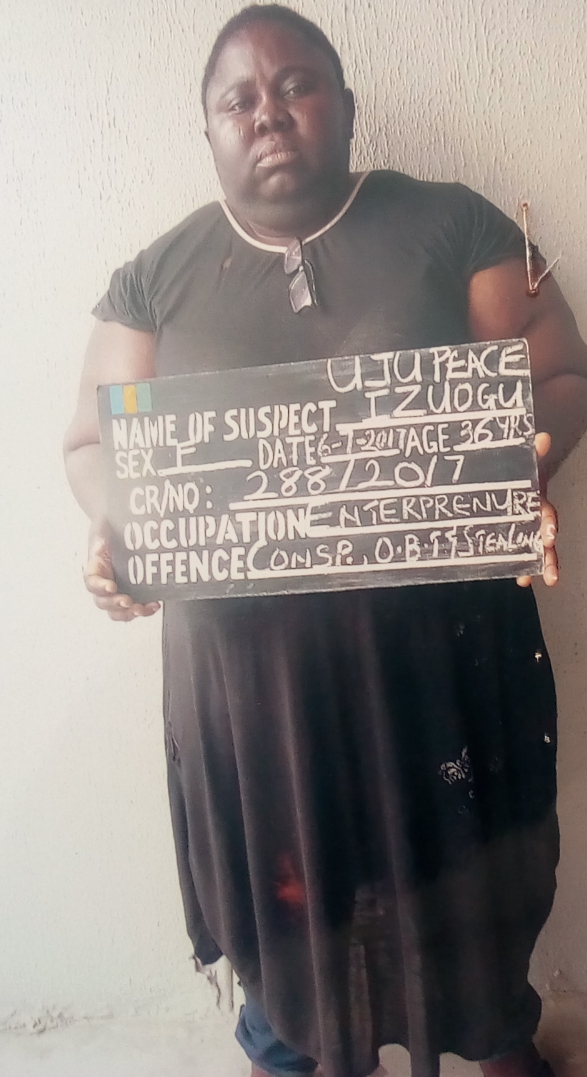 Justice Faji also ordered the winding up of Reoworld Enterprises Limited, a company used as conduit pipe, in committing the fraud and forfeits its assets to the Federal government of Nigeria. While also ordered the two convicts, Uju and Richard to make restitution of the sum of N121 million to the victim of the fraud.

The convicts’ sentence terms, according to the presiding judge will start counting from September 5, 2017, when they were first arraigned before the court.

The two fake BDC operators, were brought before the court by the men of  Police Special Fraud Unit (PSFU), ikoyi, Lagos, on charges bordering on conspiracy, obtaining the sum of N162 million by false pretence and fraud.

During their trial, the prosecutor, Mr. Emmanuel Jackson, a Chief Superintendent of Police (CSP), had told that the convicts used the ploy of assisting their victims in sending the money to their clients in China, Dubai and Turkey, for the payment of goods they ordered for, but ended up defrauding them.

The prosecutor had also told the court that it took the police longer time to arrest the first convict, Uju Peace Izuogu, who collected the money through her Diamond Bank account from the fraud victims, at her hide out in Ghana. Adding that the convicts are facing another fraud charges before another court.

CSP Jackson had told the court that the offences committed by the convicts were contrary to and punishable under sections 8(a) and 1(3), and 1(a) and 1(3) of the Advance Fee Fraud and other Fraud Related Offences Act No. 14 of 2014.

The convicts, while admitting that they collected the monies from their victims, however told the court that they were disappointed by their business associates.

However, Justice Faji, had on the November 27, dismissed the defence put up by the convicts. while held that the prosecution has successful prove it case against them beyond every reasonable doubt and consequently convicted them.

However, all plea made by Uju’s counsel, E. E. Okoli, to have convince the court with the convict’s health conditions, did not hold water, as the judge held that there  was no enough evidence that the prison services, could not take care of her health conditions.

In a related development, the judge also sentenced a businessman, Chris Okoroigwe, who defrauded a businesswoman, Mrs. Oghenewaire Udoko, of the sum N24. 350 million, of to seven years imprisonment.

Justice Faji also  wound up the comvict’s company, Qihengchris Industry Limited, used as conduit pipe to defraud the businesswoman and forfeited his assets to the Federal Government.

The convicts were said to have perpetrated the fraud under the guise of supplying her 2. 128 kilogrammes of Donkey’s skin.

According to the one count charge filed and argued by CSP Emmanuel A Jackson, prosecution’ counsel from the Police Special Fraud Unit, (PSFU), Ikoyi-Lagos, the convict, Chris Okoroigwe and his company, were said to have on or about February 22, 2017 at Yaba, Lagos, with an intent to defraud, induced his victim, Mrs. Udoko, to benefit on the first convict, by false pretence of delivering to her 22.128 kilogrames of Donkeys’ hide and skin valued at N24.350 million, the he knew to be false representation.

The offence committed by the convict,  according to the prosecutor, is said to be contrary to Section 1(2) of the Advance Fee Fraud and other Fraud Related offences Act, 2006, and punishable under section 1(3) of the same Act

During the trial, the prosecution called two witnesses the fraud victim and the police investigation Officer, (IPO). While the convict was the only witness that defended himself and his company.

Delivering judgement today Justice Ayokunle Faji held that from all evidence before the court, he is of the view that the prosecution has proved its case against the defendants beyond reasonable doubt.

While reviewing the case, Justice Faji said the first defendant in his testimony while not denying the existence of the transaction, said the skin were seized by the Customs, but failed to produce any documentation to that effect.

The judge added that he is of the view that the convicts from onset of the agreement,  did not wish to to pay for the hide and skin but only fraudulently induced his victim to  obtained the property from her.

The judge also held that the frequent changes by the first convict in the price agreed and his refusal to pay at all, as well as his refusal to be evasive to both his victim and the police when invited ,  shows the fraudulent intention of the convicts.

Apart from the jail term, the court also windup the convict’s company, Qihengchris Industry Limited and ordered the forfeiture of company’s assets to the Federal Government if Nigeria.

Justice Faji further ordered that the Convict and his firm to restitute sum of N24.35m to their victim, Mrs Oghenewaire Udoko as compensation.