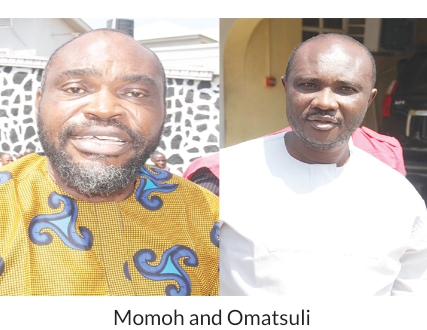 The Economic and Financial Crimes Commission, EFCC has appealed the ruling of a Lagos Federal High Court, delivered on November 11, 2020, which upheld the no-case submission filed by a former Executive Director on Projects, Niger Delta Development Commission, NDDC, Engineer Tuoyo Omatsuli and consequently discharged him.

Justice Saidu had however ordered other defendants in the charge to open their defence against the allegations.

But dissatisfied with the ruling of the court, EFFC through one of its counsel, Ekenne  Iheanachor has obtained leave to appeal the judgement and consequently filed a Notice of Appeal.

The EFCC in the Notice of Appeal stated the trial judge erred in law by holding that that he have gone through all the counts contained in the charge against the defendants in the case and that the prosecution has been unable to prove elements of the offences charges against the first defendant (Omatsuli), despite overwhelmed evidence and exhibits presented to court, which linked Omatsuli to the charges.

EFCC said Omatsuli was charged with conspiracy with three other defendants to disguise the illegal origin of the sum of N3.645 billion, contrary to the provision of the money laundering (prohibition) Act (as amended) in count one.

EFCC stated that procuring of the third and fourth defendants (Momoh and his company) to use the the sum of N3.645 billion, which formed proceed of corruption and gratification, acquiring interest in different properties which are proceeds crime together with the second defendant

The anti-graft agency also stated that it is uncontroverted through oral and documentary evidence before the lower court that Engineer Omatsuli was the Executive Director of the NDDC and by virtue of his position, part of the board and management of the agency.

Specifically, Omatsuli was said to have received the sum of N3.645 million and in receiving the funds, Omatsuli nominated Diamond Bank account of Building Associate Limited.

EFCC also alleged that to laundered the origin of the funds, Omatsuli was said to have converted some of the funds into foreign currencies and used others to acquire landed properties.

The fourth defendant were said to have used the funds received as gratification on behalf of the Omatsuli to purchase properties in the name of the Omatsuli’s company known as Don Parker Properties Limited (second defendant), in the charge which he was acquitted.

The EFCC said that the offence brought against Omatsuli and others was committed between 2014 and 2015, when he was the alter ego of Don Parker Limited and sole signatory to the bank account of the company. Adding that in order to conceal evidence during investigation  2017, Omatsuli removed himself from as a director in the company.

The EFCC further stated that the judge erred in law by discharging Omatsuli, even when the court found that the appellant had established prima facie evidence against other defendants.

It also stated that the lower court misconceived in law, when it discharged Omatsuli without giving reason or details of why it felt satisfied that the prosecution had not proved the elements of the offence charged against him.

The EFCC, had on November 8, 2018, arraigned Omatsuli, a former Executive Director of Projects of NDDC and one Francis Momoh before the court presided over by Justice Salisu Saidu, on a 45-count charge bordering on conspiracy and money laundering to the tune of N3, 645 billion.

Both Omatsuli and Momoh, who were arraigned alongside their companies, Don Parker Properties Limited and Building Associates Limited respectively, were said to have shown personal interests in the consultancy contract awarded to Starline Consultancy Services Limited by the NDDC, thereby enriching themselves unlawfully.

Omotsuli and Momoh was alleged to have received monies in tranches from Starline Consultancy Services Limited through their companies and used the funds  to purchase properties  across the country.

One of the counts reads: “That you, Engineer Tuoyo Omatsuli, Don Parker Properties Limited, Francis Momoh and Building Associates Limited, between August 2014 and September, 2015 at Lagos within the jurisdiction of this Honourable Court, conspired to disguise the illegal origin of the total sum of N3, 645, 000, 000.00 (Three Billion, Six Hundred and Forty-Five Million Naira) being proceeds of unlawful activity to wit: corruption and gratification and thereby committed an offence”.

Another count reads: “That you, Engineer Tuoyo Omatsuli, Don Parker Properties Limited and Francis Momoh sometime in March, 2017 at Lagos within the jurisdiction of this Honourable Court, did transfer by selling the interest of Don Parker Properties Limited in the property known as Block 4, Plot B25 Lekki Peninsula residential Scheme 1, Eti-Osa Local Government Area of Lagos State measuring approximately 587.195 square meters to Redline Properties Limited, which property you had acquired from Jide Tinubu, with the proceeds of corruption and gratification credited into the Diamond Bank Plc account of Building Associates Limited by Starline Consultancy Limited and thereby committed an offer”.