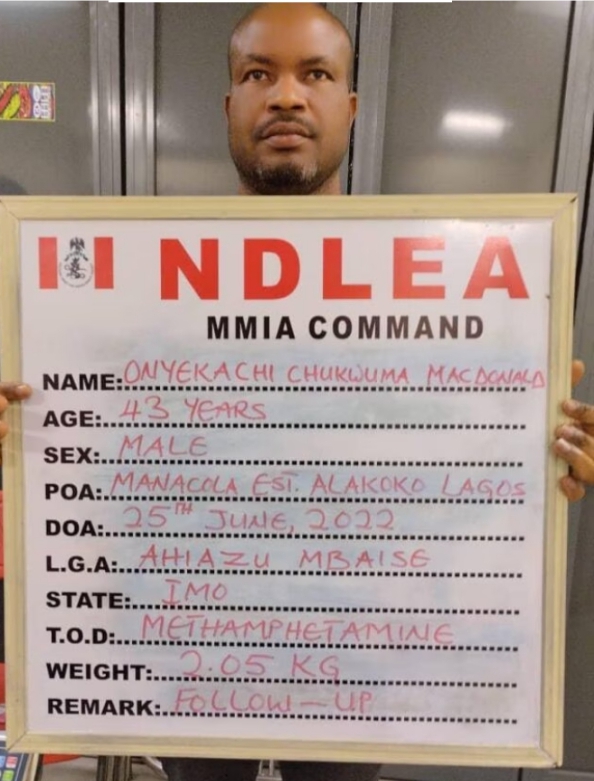 An alleged drug baron, Onyekachi Chukwuma MacDonald, was today arraigned before a Lagos Federal High Court, for attempt to smuggle 2.05 kilograms of Methamphetamine, a banned substance to United Kingdom.

He was arraigned before Justice Daniel Osiagor led-court on charges bordering on unlawful possession and exportation of the said substance, by the men of National Drug Law Enforcement Agency (NDLEA).

Arraigning the defendant, NDLEA prosecutor, Abu Ibrahim, told the court that he was arrested on June 7, during during the examination of intending Cargoes to United Kingdom via DHL at National Handling Company (NAHCO) Export Shed, a Customs Area/Point of the Murtala Muhammed International Airport, Ikeja-Lagos.

Abu further told the court that the defendant, an indigene of Ahiazu Mbaise local Government Area, Imo State, procured one Peter Christopher Anikan, a clearing agent to carried out the alleged criminal act.

The prosecutor told the court the offences committed by the defendant, contravened Sections 20 (1)(c) and 21(1) (e) and punishable under section 11(b) of the National Drug Law Enforcement Agency Cap. N30, Laws of the Federation of Nigeria, 2004.

The defendant pleaded not guilty to the charges when it was read to him.

Following his not guilty plea, the prosecutor asked for a trial date, while also urged the court to remand him in the custody of the Nigerian Correctional Services (NCoS), till the determination of the charges.

In a swift response to the prosecutor’s request, defendant’s counsel, Benson Ndakara, told the court that he was not oppose the trial date as requested by the prosecutor.

He however, told the court his client’s bail application has been filed and served on the prosecutor.

Upon confirmation by the prosecutor the he has been served with the application, which he had equally responded to.

He said if the court is mindful of granting bail to the defendant, such term should be which will compel the attendance of the defendant till the determination of the charge.

Justice Osiagor, upon hearing counsel submissions, admitted bail to the defendant in the sum of N5 million with two sureties in like sum.

The judge ordered that one of the sureties must be a Grade Level 15 official, while the second surety must be a landed property owner within the Court’s jurisdisction.

The judge while adjourning the matter till November 30, for trial, ordered that the defendant be remanded in NCoS’ custody till the perfection of the bail terms.