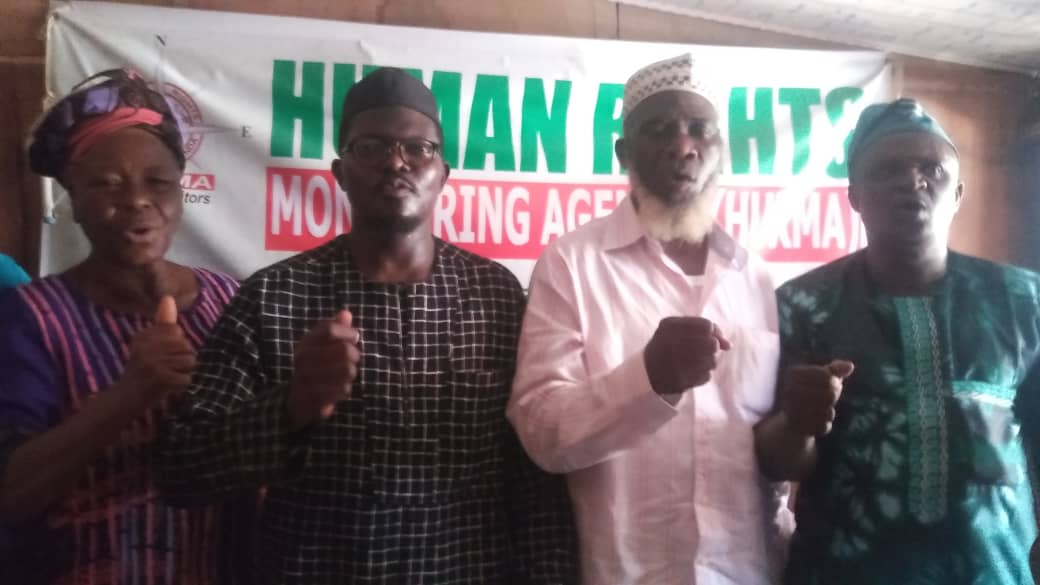 Nobody Sponsored Our Petition Against Lagos Speaker  -HURMA

A human rights group, Human Rights Monitoring Agenda (HURMA) has said that it petition to the Economic and Financial Crimes Commission (EFCC) against Mr. Mudashiru Obasa, Speaker, Lagos State House of Assembly, is borne out of its aim for accountability and probity, as the petition was not sponsored by anybody as it being speculated.

HURMA made this know during a press conference on Wednesday in Lagos.

Speaking on the petition, HURMA’s Executive Director, Comrade Buna Isiak Olaitan, said the it became imperative that the group clarify some misinterpretations and misinformation that follows the petition.

Clarifying issues on the petition, Comrade Buna said: “we wrote to the Economic and Fina cial Crimes Commission (EFCC) against the Speaker of the Lagos State House of Assembly (LSHA), Honorable Mudashiru Obasa, and also to clear the air with regards to controversies being generated thereby.

“As you are aware, the petition from our office to the EFCC had to do with our demand for investigation of very serious allegations of misuse of office, breach of public trust and mismanagement of public resources by the Speaker of the Lagos State House of Assembly, Honorable Mudashiru Obasa, based on avalanche of petitions and complaints received by our office from concerned members of the public.

“Against certain insinuations thrown to the public by those likely to be affected by the petition, HURMA wishes to state categorically that as a public agency which has saddled itself with the goals of ensuring good governance, public probity and accountability as well as adherence to due process by public officers and institutions, our activities are detached from partisan considerations. Our abiding belief is for justice to be served irrespective of who is involved.

“Contrary to the wrong speculation that our petition to the EFCC, which came two days after internal wrangling broke out among members of the House of Assembly was in support of a faction of the divided House, we state here that this is far from the truth as the petition has been a work in progress a couple of weeks before the House imbroglio. We however wish to state our observation here that, Obasa’s action of deposition and suspension of his colleagues fits into parts of the allegations against his leadership, which is that of reckless use of power and disregard for procedures set by the House.

“We also want the public to know that many weeks after our office received the complaints against the Speaker, signals of these complaints and allegations were sent to him through his aides in LSHA but he chose to treat them with disdain. We indeed made subtle demands on him such as reversing every anti-people policies as well as a reversal of any financial misappropriation without proper legal basis as those policies and activities would result into more sufferings for the poor masses. The Speaker however considered the voice of the people as nothing.

“After waiting for several weeks without any response from the Speaker, HURMA was left with no other option than to petition the EFCC as rumor were already spreading that our organization has been compromised on the matter.

“As the LSHA itself could testify that HURMA takes public complaints against breaches sent to it seriously as we have also written to the House in the past on germane public issues for which we were granted audience. We therefore belong to every good members of the public and to no specific person”.

HURMA while called on Mr. Obasa to step-aside pending the EFCC’s investigation on allegations against him, reiterated the allegations as contained in the petition as: Purchase of a bullet-proof car with a market value of less than N100 Million but bought at alleged inflated price of N300 Million, Apart from being inflated by a whopping 200%, the purchase of the vehicle was done in a questionable manner contrary to procurement acts. This constitutes a flagrant abuse of office and the exercise of privilege with impunity in a country where majority of the citizens live on less than a dollar a day.

Unilateral purchase of 40 cars for members of the Assembly with neither prior discussion with members nor official approval by the House. These vehicles, which we have on good authority, were imported by a notable politician for a political project which failed to see the light of the day were procured by the Speaker at give-away price by the Speaker who has since refused to either release their papers to the supposed beneficiaries (the House members) or tender their receipt for retirement into the Assembly’s accounts for obvious reasons as the cost of the vehicles is only known to him.

Purchase of 11 other vehicles without bidding, advertisement and rules and regulations guiding procurement or legislative approval. This is outright disdain for public accountability, probity and established checks and balances.

Use of fictitious companies as fronts for cornering public contracts and fleecing of public funds. The most notorious of these companies is a certain De-Kingrun Multipurpose Nigeria Limited with CAC No: RC 748741 where all six children of Obasa are the shareholders. A probe of the businesses of the House since his leadership should reveal how notoriously Obasa has been breaching public trust by diverting contracts and projects into companies of his interest with the active connivance of the clerk of the House, Mr. Azeez Sanni Adebowale.

Compromise of operational procedures, creation of an extra-legal hierarchy and privileging cronies at the expense of the system. This is by far the greatest calamity to befall the Lagos State House of Assembly under Obasa’s watch. Regulatory procedures have been in most cases set aside with the connivance of the Clerk of the House, with the ill-intent of carrying out businesses of the House for private gains and as a private concern.

Creation of an extra-legal hierarchy within the workforce of the States Assembly where his cronies (including a concubine of his popularly called Madam Speaker) reign supreme. It is on good authority that the lady named Nike Ajibose was promoted to level 9 in the Civil Service without promotional exams.

The group stated that it was based on the above that it wrote to the EFCC that these reckless, illegal and unauthorized spending of public funds which come to about N2.4 billion in 11 months for vehicular procurements only, must be thoroughly investigated.

HURMA said its is believe that the alleged action of Honourable Obasa, is detrimental to the interest of the people of Lagos State and his primary constituency which elected him to serve, as it also breach of public trust and a dent on the anti-corruption drive of the party and the government to which he belongs, hence the need to have him investigated and put him under public scrutiny and accountability before further damage is done to the collective patrimony of Lagosians.

When this medium earlier contacted Mr. Tolani Abati, the Speaker’s Chief Press Secretary, he declined to comment on HURMA’s petition against the Speaker, on the ground that the petition was not directed to his boss.

1 thought on “Nobody Sponsored Our Petition Against Lagos Speaker -HURMA”