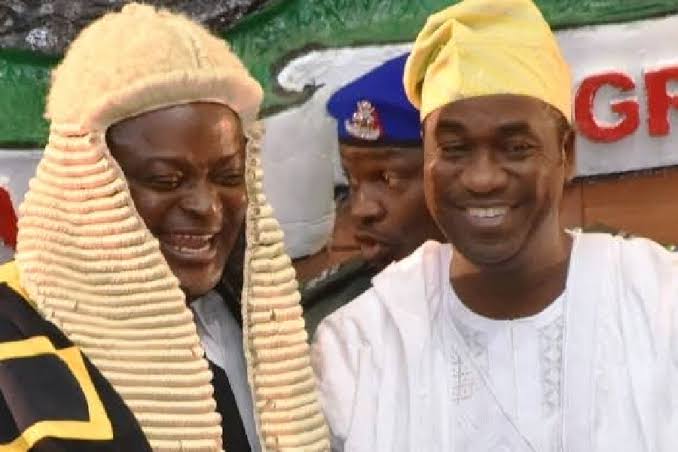 Obasa Celebrates Dep. Gov. Hamzat At 58, Praises Him For His Dedication To Service

The Speaker of the Lagos State House of Assembly, Right Honourable Mudashiru Obasa, says the State remains proud to have Dr. Obafemi Hamzat as its Deputy Governor.

Speaker Obasa said the Deputy Governor has shown consistently, his commitment, dedication and passion to the goal of making Lagos an enviable State in Nigeria and one admired by the world.

He added that Hamzat at 58, remains a perfect example of a technocrat who is not only effective in the discharge of his duties, but uses all within his powers to ensure the good of the majority.

The Speaker further stated the the seamless running of the Lagos government made up of the Executive, legislative and judicial arms, attributing this to the knowledge, wisdom and zeal of leaders including Hamzat to make the State constantly habitable for the residents.

“I congratulate Dr. Obafemi Hamzat, my brother and friend in the service of Lagos and the nation as he marks his 58th birthday.

“To say Lagos is not tired of him is just saying the obvious. He has helped, over time, to lift the civil service of our dear State to an enviable height.

“We are happy to have him serve Lagos as Deputy Governor at this time, especially with his knowledge of how our dear State works.

“Again, it is noteworthy that our Deputy Governor has consistently shown beyond every reasonable doubt what a dependable ally in the scheme of progress he is.

“He has always been a loyal team player with fantastic knowledge and managerial skills. His records of service and achievements cannot be under-emphasised and have been sources of encouragement for many.

“We remain proud of him as we wish him more divine knowledge, wisdom and vitality to carry on in the service of Allah and the people.

“Happy birthday tfrom me and my colleagues at the Lagos State House of Assembly,” the statement read.