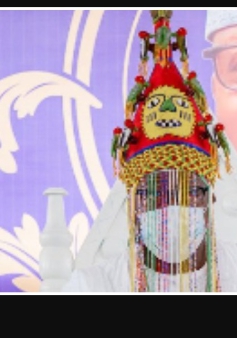 One of the ruling houses in the lineage of Oniru royal family of Iruland, Victoria Island, Lagos, the Omobolanle Abisogun Ruling House, has called on the Economic and Financial Crimes Commission (EFCC) and the Independent Corrupt Practices and Other Practices Commission (ICPC) to immediately commence investigation into the financial dealings of Oba Wasiu Gbolahan Lawal the Oniru of Iruland as regard his dealings with the family properties.

The royal family also asked the general public to disregard and discountenance a purported public Notice dated 19th of October 2020 pasted by the BA Law Firm,  saying it is another move to illegally appropriate the properties that belong to the Oniru families.

These calls were contained in a statement tittles ‘Corruption and Imposition: EFCC Must Investigate Mr Wasiu Gbolahan Lawal’, issued by the family through one of their counsel, Mr. Yomi Haroun of Yomi Haroun & Co.

The royal family described the BA Law Firm, as faceless and unknown to it, adding that the three Ruling Houses that constitute the royal family of Iruland did not at any time give the power of Attorney to any firm or person known as BA Law Firm.

Giving a historical narrative to the royal families of Iruland, the family said that  the principal members of the Oniru family are the custodian of the heritage and properties through the management committee comprising of all the three Ruling Houses of Iruland  to coordinate the affairs of the family.

They added that the Chieftaincy Family Property Company Limited derives it legitimacy from the power of Attorney unanimously donated on the 3rd of June , 1993 and registered as No: 73 at page in volume 1942 at the Land Registry, Alausa, Ikeja, Lagos.

The Omowunmi Abisogun Family added that the claim by BA Law Firm to be the solicitor to Mr Wasiu Omogbilahan Lawal whose legitimacy as Oniru is still  a subject of litigation at the Lagos High Court cannot be a basis for usurping the constitutional rights of the management committee of the three Ruling Houses as expressed in the Oniru Chieftaincy Family Property Company Limited.

They stated that it is on record that no king of Iruland can single handedly take decisions that affect the three Ruling Houses, the essence of which is to create checks and balances and to avoid impunity, abuse of power and and subversion of due process.

The Omobolanle Abisogun Family therefore called on the general public to discountenance and disregard the public notice purportedly authored by BA Law Firm on the revocation of the power of Attorney and consequently called on the EFCC and ICPC to immediately commence investigation on the financial dealings of Mr Wasiu Gbolahan Lawal with respect to the Oniru family property. It added that the family demands remain the same as sent in their last petition to Governor Babajide Sanwoolu.

“That the action of Governor Babajide Sanwo- Olu on the illegal presentation of certificate and instrument of office to Mr Wasiu Gbolahan Lawal, constitute a violation of the Constitution of the Federal Republic of Nigeria and the extant laws of Lagos State as regards  the appointment of Oniru of Oniruland.

“That the illegal appointment of Wasiu Gbolahan Lawal is sub-judice as the case on Oniru throne is in the court of competent jurisdiction”.

The Omowunmi Abisogun family added that Wasiu Gbolahan Lawal has neither paternal nor maternal relationship with the Oniru family as both his father and mother’s root are not from Oniru but from the Ojora family”.

The Omowunmi Abisogun royal family, also called on the Speaker of the Lagos State House of Assembly, Honorable Mudashiru Obasa to reverse the illegal appointment of Wasiu Gbolahan Lawal. While also called for the declaration of their Ruling House as the authentic and legitimate heir to the throne of Oniru of Iruland.