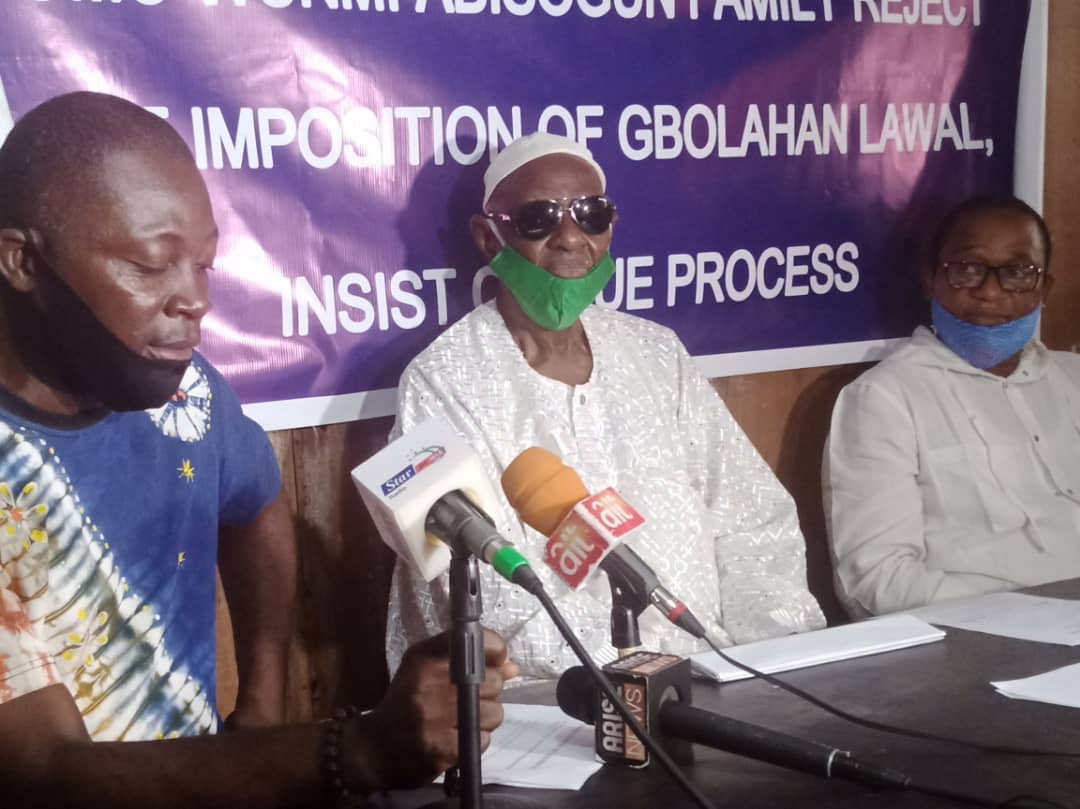 (L-R) Awose Oluwasola, member of Abisogun Ruling House; Alhaji Surajudeen Durosinmi, Head of the Family and Ojagbuyi Takuro, a Member of the Family, During a Press Conference on Saturday

The Omowunmi Abisogun Ruling House of Iruland, Victoria Island, Lagos State has called on the Inspector-General of Police and the Lagos State Police Commissioner, to come to their rescue from alleged undue intimidation and harassment by the monarch of town.

The royal families in the town have been in loggerheads since the installation of the new monarch, Wasiu Gbolahan, while some families were accusing the state government of alleged imposition of the monarch on them, others were said to be in support of the government on his enthronement.

However, the Omowunmi Abisogun Ruling House of Iruland, Victoria Island, who had been a major opposition to the emergence of the monarch, at a press conference held on Saturday, alleged that since  the imposition of the monarch, Wasiu Gbolahan, by the state government, he has been a ‘torn in the flesh’ of all those who opposed his emergence.

The head of Omowunmi Abisogun ruling house, Alhaji Suraju Durosinmi, who spoke on behalf of the family, called on the Inspector-General of Police, Mr. Ibrahim Adamu and the Lagos State Commissioner of Police, Mr. Hakeem Odumosu, to come to their aid, in order to checkmate the alleged illegal activities allegedly perpetrated by the monarch.

The family pleaded with police boss to come to their rescue as matter of urgency and arrest the so called palace guards, the land-grabbers and other local militias who allegedly constituted themselves into instrument of terror inflicting harms and injuries on people of the town.

The family urged all the residents of Iru-Land to discountenance all the directive of the king regarding their properties and others.

“We have observed the reckless harassment, threat to lives and properties of members of the Oniru Family and other residents of Iru-Land and its environs by the king, we equally observe the simultaneous attempt by the same force to legitimate his alleged illegal imposition through a so called ‘political reconciliation’ with some elements that have been part of the grand scheme used so far in the attempt to hijack the Oniru stool.

“Consequently upon his alleged imposition by Governor Babajide Sanwo-Olu against the ruling of the court that the status-quo ante should be maintained, meaning that all parties should stay action pending the outcome of the court’s decision; as well as the the agreement reached at the office of Department of State Security (DSS) Oba Gbolahan has been embark on reign of terror targeted at usurping people’s properties with the infliction of bodily harm on those who resist him.

“We hereby petition you to swiftly deploy your men to Iruland, to first and foremost, arrest all the criminal elements and put a to their criminal activities and thereby curb the land grabbing and reign of terror, until the outcome of the court .

Alhaji Durosinmi-Abisogun, while commended the National Judicial Council (NJC) for monitoring court proceedings relating to the Oniru stool, also pleaded with the judicial body to ensure that there is no miscarriage of justice, so that the right family can take their rightful position.

A member of the family who phone-in from the United States of America (USA) during the conference, Mr. Rasaq Olasunkanmi Adele, also called on Nigerians to discountenance the alleged purported support of the enthronement of Oba Gbolahan, by a group of people who claimed to be representing Abisogun ruling house, saying that those group of people are unknown to the Abisogun ruling house headed by Pa. Surajudeen Durosimi Abisogun.

“The only head of our family is Alhaji Surajudeen Durosinmi Abisogun. Those who claimed to be from Abisogun ruling house and supported the nomination and enthronement of Wasiu Gbolahan, as the monarch of Iruland, are not known to us.

“The so called Oba Wasiu Gbolahan is also not member of Abisogun ruling house and Abisogun Ruling House is only one family’, Adele stated