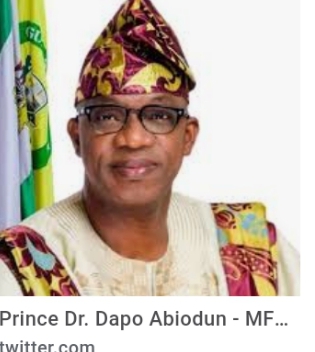 We are calling on Governor Dapo Abiodun of Ogun State to retract his comment on the location of the proposed Agro Cargo Airport in the State.
It is unfortunate and misinformation that the governor who is from Iperu-Remo, an ancient town in the Remo zone of the state, could come out publicly, while hosting Members of Senate Committee of Aviation led by it’s chairman, Senator Smart Adeyemi, recently, and said that the airport is located in Ilishan-Remo, a neighbouring town to his own town.
For avoidance of doubt, see all Nigeria newspapers of March 7, 2021, with the caption; “Ogun Needs Agro-Cargo, Not Passenger Airport, Says Abiodun’.
In the story, Governor Abiodun was verbatimly quoted to have said that the site of the project was located in Ilishan-Remo.

It’s sad and disheartening that someone like our Governor, who is of Iperu blood could not or did not know his town border with the neighbouring communities, when his predecessors,   H. E Gbenga Daniel and H.E &  Senator Ibikunle Amosu, who were not from Iperu-Remo, even knows the boundary his town, more than him.
Mr. Governor sir, kindly read the reports below and make urgent correction on your pronouncement, which could set the two friendly town against each other. PMnews of May 14, 2015 with the caption “Blame Gbenga Daniel For your Predicament -Ogun Tells Agro Cargo Contractors. The Point, June 30, 2017, “14 States Spend N250bn on  Abandoned, Unviable Airport Projects.Vanguard, January 9, 2019, “Agro-Cargo Airport: “Daniel Dares Amosun To Probe Him.
A prominent indigene of Iperu, also stated that the land in question belongs to Orubo Family of Iperu. He refers that governor’s attention to a judgment delivered on October 11, 2011, by Honourable Justice N. I Saula, of a High Court in Ogun Stare, in a suit marked HCS/123/2002, between Ope Osu & others Vs Jonathan Famoriyo & others.

For this, we call on those that are the governor’s associates, his brothers & sisters, who are indigenes of Iperu-Remo, Akesan Baale Oja, to kindly call the Governor to make ‘Corrigendum’ and apologize to both Iperu and Ilishan people for the wrong impression, which can pitch the two communities against each other.

For Mr. Governor sir, it is not too late to tell the world that your pronouncement was ‘a sleep of tongue’, when you said the site of project is Ilishan-Remo.

Secondly, not to set you kinsmen and their neighbours, The Ilishan people against each other, kindly set up committees, to appease to the two communities on the misinformation.