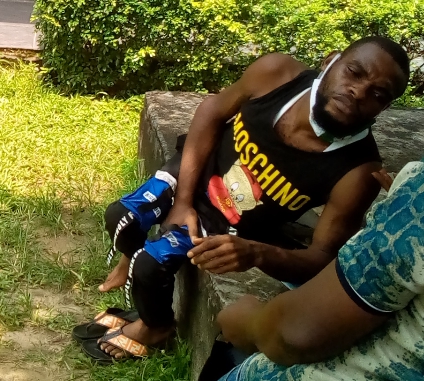 The Physically Challenge-man, Chinedu Ndubuisi, Jailed For Dealing In Marijuana

Physically Challenge-man, Other Jailed For Unlawful Dealing In India Hemps

A 21 year-old physically challenge man, Chinedu Ndubisi, was today, convicted and sentenced to four months imprisonment, by a Lagos Federal High Court, for unlawful and illegal dealing in 1.6 kilograms of Cannabis Sativa, popularly known as marijuana.

Also, a 25 year-old Abdullahi Yaro, has been convicted and sentenced to three years imprisonment, for unlawful and illegal dealing 350 grams of cannabis sativa.

Both Chinedu and Abdullahi were handed over the jail terms by Justice Rilwan Aikawa, after they both pleaded to one count each, slammed on them by the National Drug Laws Enforcement Agency (NDLEA).

Arraigning the convict, Mr. Jeremiah Aernan, told the court that the physically challenge man, Chinedu, was arrested on August 8, 2020, at Lekki Phase 1, Lagos State, where he was hawking the banned weeds.

Aernan also told the court the the 25 years old Abdullahi, was arrested on July 12, 2020, at Alade Market, Allen Avenue, Ikeja, Lagos State, where he was selling the prohibited weeds.

The prosecutor told the court that the offences committed by the  two men are   contrary to and punishable under S. 11(c) of the National Drug Law Enforcement Agency Act Cap N30 Laws of the Federation of Nigeria, 2004.

The two convicts, who elected to represent themselves, pleaded guilty to the charges against them.

However, the convict’s, in their separate pleading for mercy, begged the court to temper justice with in sentencing them.

Justice Aikawa however gave the physically challenge man a soft landing, by given him an option of N50, 000, fine.