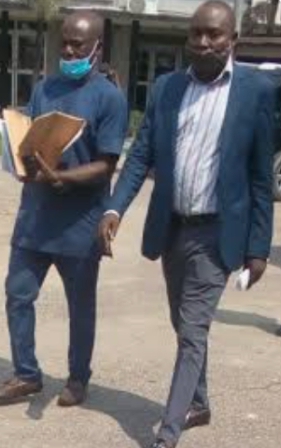 The Defendant, Fidelis Egueke (Left) With The Arresting Officer, When He Was First Arraigned

A former bank manager, Fidelis Egueke, has been re-arraigned before the Federal High Court, Lagos, over alleged fraud of N179, 498 million, by the men of Force Criminal Investigation Department (ForceCID) Alagbon-Ikoyi, Lagos.

The former bank manager rearraignment was sequel to a third 16 counts amended charge filed against him by the police.

Fidelis, a former branch manager of Asaba, Delta State, Zenith Bank Plc, who resigned his appointment with the bank after being queried on the alleged fraud and demarketing his bank, was first arraigned before the court sometimes in November, 2020, on two previous amended charges of three and 14 counts of conspiracy, fraud, unlawful conversion, obtaining by false pretence, and unauthorized withdrawal.

In the amended charge, the police alleged that the former bank manager, conspired with others now at large and without any authorization, fraudulenty removed the total sum of N174. 498 million, from a company account, domiciled in Guarantee Trust Bank Plc.

The police alleged that the defendant committed the offences between May 14, 2010 and December 31, 2019.

At the resumed trial of the defendant on Wednesday, the prosecutor, Barrister Animashaun, informed the court of the amended charge.

The prosecutor told the court that the new amended charge was sequel to new several frauds discovered after the previous two charges were filed. He therefore urged the court to strike out the former charge, for the former bank manager to take his plea on the 16 counts amended charge.

Upon the prosecutor’s submission, the court ordered that the amended charge be read to the defendant, for his plea to be taken.

The defendant, however pleaded not guilty to all the charges when it was read to him.

Following his not guilty plea, while his counsel, Ugochukwu Egwu, urged the court to allow the defendant to continue with the bail terms earlier granted by the court. The prosecutor, however, informed the court that he was ready for trial and that one of the witnesses was in court.

The presiding judge, Justice Tijjani Ringim, after taken the defendant’s plea and listened to both counsel, however adjourned the matter till November 30, for trial.