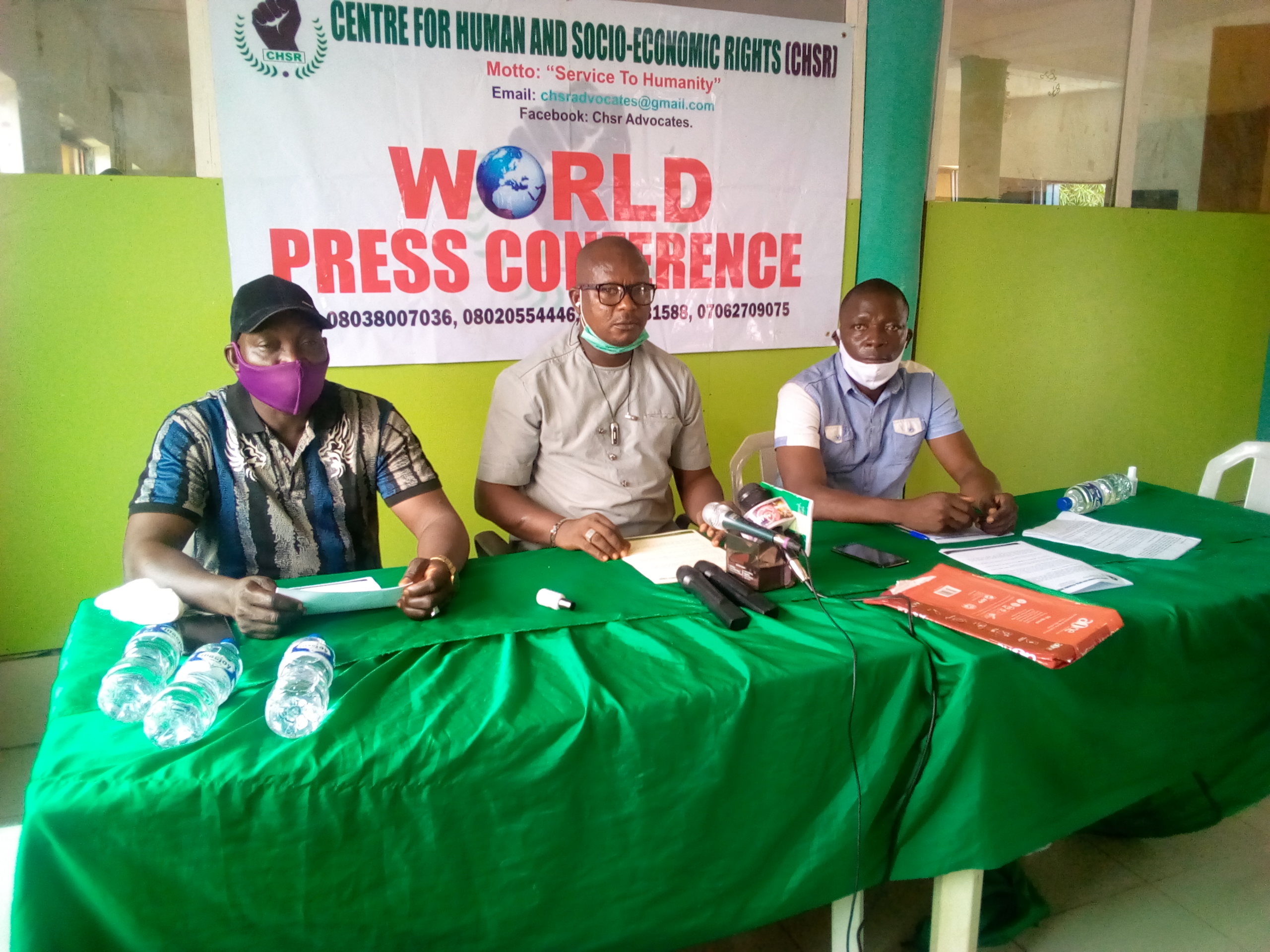 Centre for Human and Socio-Economic Rights (CHSR) also called on President Muhammadu Buhari, to represent the Acting Chairman of the Economic and Financial Crimes Commission (EFCC), Mr. Ibrahim Magu, to the Senate, for confirmation as the substantive chairman of the commission.

In alternative, CHSR asked the President to remove Ibrahim Magu as the EFCC’s chairman and appoint another person to head for the Commission, since Magu had been rejected twice by the Senate of the eighth National Assembly.

The group also called for the independence of the EFCC to enable it fight corruption with any form of influence from the presidency.

CHESR also called on the EFCC to be ‘de-Politicize’ in its fight against corruption and to stop all forms of intimidation, harassment and molestations of innocent Nigeria citizens and political motivated litigation in the name of fighting corruption.

Above were parts of the CHSER’s demands while ex-raying President Buhari’s fight against corruption in the five years of his administration, during a press conference held in Lagos on the nation’s State of Affairs, on Tuesday.

Speaking during the media parley, Comrade Alex Omotehinse, CHSER’sNational President, said Nigerians voted President Muhammadu Buhari with the belief that he will fulfil all his electioneering campaign promises to fight Corruption epidemic facing the country. But said, from 2015 till date, “we are yet to see any meaningful achievement in their so called fight against corruption except winch hunting and selection against their perceived opponents”.

Omotehinse who cited the cases of a former Kaduna State’s Senator, Mallam Shehu Sanni; a human Right lawyer and Senior Advocate of Nigeria, Ebun-Olu Adegboruwa; Benue State’s Shawarma maker, Ms. Mnena Ato, who was allegedly arrested and detained by the EFCC’s officers over N1, 600, transactions;  Mr. Adeyemi Ikuforiji, a former Speaker of Lagos State Assembly and many others, as justification that the anti-graft agency is been used against perceived political enemies.

For the EFCC to be free from all forms of presidency’s interference or influence, Omotehinse counselled Buhari to borrow a leaf from the former President Goodluck Jonathan’s non-meddlesomeness in the affairs of Independent National Electoral Commission (INEC), which he said let to the success recorded in the 2015 General Elections. Adding that once an organ of the state is not established and used as a political instrument against perceived enemies and advancement of selfish and group interest it is bound to deliver its mandate.

The Omotehinse’s led group also called on the antigraft agency to beam its searchlight on the office of Assistant to the President on Sustainable Development Goals (SDGs), headed by Mrs. Adejoke Orelope-Adefulire, a former deputy governor in Lagos State, and investigate the alleged alleged N23 billion Fraud rocking the agency. And to also prosecute former governor of Imo State and now a senator, Mr. Rocha Okorocha, following the forfeiture of N2.7 billion allegedly recovered from him.

On the EFCC’s five years under President Buhari, Omotehinse said: “the Economic and Financial Crimes Commission (EFCC) was established in 2004 by the government of former President Olusegun Obasanjo following the failure of previous anti-corruption agencies to successfully eliminate corruption in Nigeria.

“The corruption monster in the country must be fought successfully before the country will be able to pursue its dream of being one of the largest economies of the world. It is not the ordinary man on the street who is fighting tooth and nail to survive because the Nigeria Government has failed to provide the basic needs of life – food, shelter, clothing for him that should be held responsible for the  corruption in the country today but the Nigerian state and by extension, the men and women who pilot the ship of  the country, who out of insatiable lust for wealth, and mainly richness, embark on primordial accumulation of wealth and concentration of wealth on few individual thereby creating a disorganize society.

“The EFCC seems to be a toothless bulldog, selective in the discharge of its duties and lawless as it does not in most cases, follow due process and obey the rule of law. EFCC has become an extra-judicial body causing fractures on the constitution in the name of law enforcement, prosecuting people on the pages of newspapers without any compelling evidence and trying to intimidate innocent people.

“There is no doubt that the commission has done some good work, for example n Thursday the 11th of June 2020 the Ilorin Zonal office of the Commission in a press briefing reported how they Uncovers 1,000 ghost workers in the kwara state Universal Basic Education Board SUBEB that leads to the detention of a permanent secretary and a Director. Few days ago it was also  widely reported about  the effort of the Commission in the case of Senator Rochas Okorocha the former Governor of Imo State that out of the 7.9 billion naira claimed to be stolen by the former Governor ,that the Commission have recovered and returned the sum N2.7 billion

“However, no matter the antithetical views of the examiners of the EFCC, one basic fact that is undoubtedly is that the EFCC has not been able to meet its mandate as corrupt officers and practices are visibly felt in the society.

“In order to successfully fight corruption in Nigeria through the instrumentality of the EFCC, Conscious effort should be made by the government that all corruption-friendly relics of inequality, bogus allowance and pension for political elite in our laws and law books should be weeded out. Equality before the law as a concept has to be practiced in order to avoid selective justice and disobedience to the rule of law.

“The President Muhammed  Buhari should borrow a leaf from the former President Jonathan’s non-meddlesomeness in the affairs of INEC. The success of the Independent National Electoral Commission in the 2015 general elections proves that once an organ of the state is not established and used as a political instrument against perceived enemies and advancement of selfish and group interest it is bound to deliver its mandate”.

EFCC as a political instrument against perceived political enemies and advancement of selfish and group interest: “CHSR stated: “APC rode to power on the promise of fighting corruption, anti-graft agencies should not be used to persecute perceived political enemies whether in opposition parties or within the same party, government should concentrate on serious cases, and not trivialize the fight against corruption by expending public resources unjustly on cases that are relatively administrative lapses, individual or group interest and political enemy instead of pursuing absolutely corrupt practices, for example:Ebun-Olu Adegboruwa (SAN) a lawyer and human rights activist, was charged to court for allegedly dealing in property forfeited by order of court to the Federal Government through the EFCC. Whereas, Adegboruwa maintained that he committed no offence in law, but only assisted two business partners to broker a settlement arising from a telecom transaction and that the EFCC was only taking advantage of the anti-corruption war of the Buhari regime to persecute him “because of his constant criticism of the Buhari administration and in particular because of his involvement as defence counsel in the case of Chief Government Ekpemupolo (alias Tompolo) and the cousin of the former President.

“Ms. Mnena Ato, Managing Director and Chief Executive Officer, Star Shawarma, Makurdi, Benue State, was rrested and detained over N1, 600, alongside, her accountant and salesman and made to  sleep in the agency’s detention facility, just because “an officer of the EFCC had visited her shop to purchase an item worth N1,500.

“On Honourable Ikuforiji, a former Speaker Lagos State House of Assembly Ikuforiji’s case with EFCC is clearly a political infighting with frivolous petition.
“The former Speaker and his Personal Assistant were alleged of receiving cash payment without going through a financial institution and that contradict the money laundry act. Meanwhile, from our finding, we learnt that whenever the Assembly members need to use a large sum of money for a certain project like travelling there will be need for the Assembly to issue cheque to the bank and the bank will use its bullion van to bring the cash to the assembly account department where all the Honourable members that are beneficiary to money will go and dully sign to collect the amount meant for them.
“A case of gross repetition and duplication of same allegation of accepting cash payment without going through a financial institution, is a clear case of continuing wastage of public fund in persecuting perceived political enemy within the same political party in the name of anti-corruption fight”.

“On Senator Shehu Sanni, “for an anti-graft agency with sufficient manpower and investigative tools, it defies logic why the agency simply can’t reduce its accusation against Senator Shehu Sani into a coherent charge upon which he ought to be arraigned for the adjudicatory determination of his guilt or innocence.

“Firstly, the allegations against Senator Shehu Sani seemed straightforward enough until the desperation to hang the man by all means took a turn into new direction. He was accused of obtaining a bribe of $10,000 to exert inﬂuence on the EFCC Chairman, Ibrahim Magu, to protect an associate, Alhaji Sani Dauda, from prosecution on a matter. Later he was alleged anew that the bribe money was $20,000 and it was collected by Senator Sani to prevail on the Chief Justice, Ibrahim Tanko, to favor the accuser in a matter before the court, the CJN denied any such transaction, and once again, the narrative was switched, just to achieving a set agenda of political score and intimidation”.

“On the EFCC’s Acting Chairman: “there has been an impasse within the Nigerian government and the public, this stems from the controversy on whether the President’s appointment of the EFCC Chairman, requires conﬁrmation from the Senate, the legality of Ibrahim Magu remaining in office without Senate confirmation.

“The Senate had rejected twice President Buhari’s nomination of Mr. Ibrahim Magu as substantive EFCC Chairman at the 8th Assembly, and now at the 9th Assembly when APC have a clear majority and the leadership of the two chamber, the Buhari administration ought to have re-presented Mr. Ibrahim Magu to the new Senate for his confirmation as the commission chairman.

“In our opinion, the intendment of the legislature in making the appointment of the Chairman of EFCC by the President subject to confirmation of the Senate will be clearly appreciated, if the Nigeria experience is taken into cognizance. The position is quiet sensitive, if the President is allowed to appoint and dismiss at his discretion, this might lead to political witch-hunting and selective ﬁght against corruption, as being witness by cases mention above and many others unreported”.

CHSR therefore tasked the EFCC to always follow and obey the rule of law in discharge of it duties, saying that “constant disregard of lawful order of the court is also a high level of corruption”.

It also called on the EFCC to give way for serious and absolute corrupt cases and stop the wastage of public fund on all trivial and politically motivated cases, such as the case of Senator Shehu Sanni, Honorable Ikuforiji and others.

The group also used the conference to demand for adequate infrastructure, a robust security, benefits and care policy for the medical and non-medical staff of our hospital, as compensation for their fight against COVID-19 pandemic