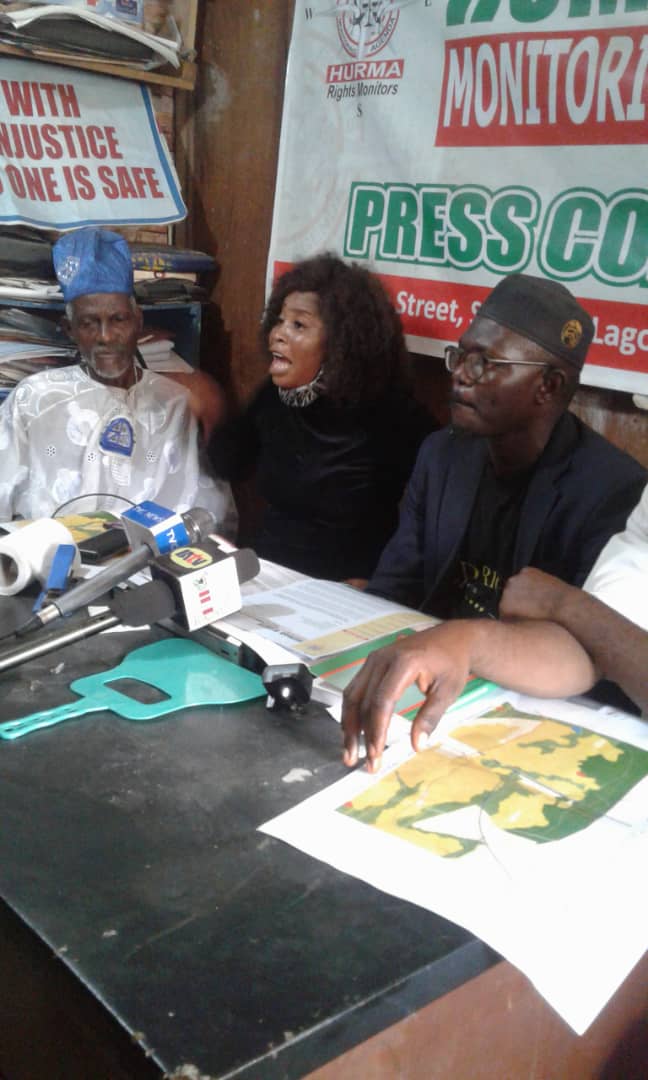 A human rights group, Human Rights Monitoring Agenda (HURMA), has appealed on the Lagos State government, to urgently stop alleged proposed move by the State’s Ministry of Works and Housing, to demolish unaffected structures for construction of roads in Ijedodo, Ijegun and Abule-Ado of Iba Local Council Development Area (LCDA).

HURMA’s appeal, is sequel to a petition forwarded to its office by the residents of the communities, who stated that the  alleged proposed demolition, the concerned Ministry, claimed was to give way for the construction of 19.39 km road linking Ijegun, Ijedodo and Abule-Addo.

The affected communities appeal captioned ‘SOS by members Ijegun; Ijedodo and Abule-Addo communities; Why the Lagos State government should avoid another protest’, was read by HURMA’s Executive Director, Comrade Olaitan Isiak Buna, at a media parley, on Monday.

HURMA while sympathize with the Lagos State government over the unwarranted destruction of life and properties witnessed during the #EndSARS protest, and prayed for peace and development in the State. Also, appeal to the State government not to deviation from what is in the original Ijegun-Ijedodo-Abule Ado model city plan 2010-2020 as approved by the state government.

HURMA’s statement reads in part: “we humbly sympathize with the Lagos State Government with respect to the unwarranted destruction of life and properties during the last EndSARS protests, we pray for peace and development in our dear state.

“The pro-people position of Lagos State Government including State House of Assembly is highly appreciated and we hope they will do more in terms of representing the genuine interests of Lagosians and promote justice, peace and development to all.

“HURMA’s Secretariat has just received a save our soul letter from the people of Ijedodo, Ijegun and Abule Addo of Iba Local Council Development Area [LCDA], about the intent to illegally and unjustifiably  demolish the houses/properties of the poor, marginalized people by the Lagos State Ministry of Works in collaboration with Omoonile hoodlums and thugs.

“Its on record that the Committee on Work, Housing and Infrastructure Development of the Lagos State Assembly visited the disputed site for the proposed 19.39 km road to link up Ijegun-Ijedodo and Abule-Addo in the presence of the residents’ lawyer and the Chairman of the Committee on Works and infrastructure, Mr. Nureni Akinsanya, who promised to go back and report to the House based on their findings and then forward such to the Government.

“While these communities have been agitated following the marking off many project’s Right of Way (ROW), affected residents were irked by the development which they described as a total deviation from what is in the original Ijegun-Ijedodo-Abule Ado model city plan 2010-2020 as approved by the state government.

“Our prayers, that the Lagos State government should stick to the original plan 2010-2020 on Ijegun-Ijedodo-Abule Ado model city; that the harassment of the people by the agencies of Lagos State and Omoonile must stop immediately; that the rich people encroachment on the original plan should be the focus in term of documents verification and not the wretched of the earth who are trying to survive.

HURMA while thanking the Speaker of the State’s Assembly and encourage the government to come out and allay the fear of the people and give them succour at the most critical period. However stated that it will not hesitate to fully mobilize all the fighting forces in the human rights community to rise in the defense of people’s rights on the matter.