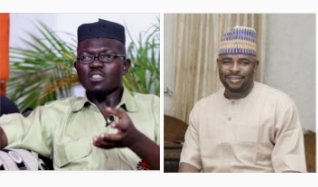 A human rights group, Human Rights Monitoring Agenda (HURMA) has congratulated Mr. Abdul Hammed Salawu, the Chairman of Somolu Local Government Area of Lagos State, on his reelection.
Salawu popularly called Dullar, was reelected as the council chairman for another four years in the local government election held on July 24.

HURMA in a congratulatory letter to Dullar signed by it’s Executive Director, Comrade Buna Olaitan Isiak, charged the chairman to reinforce the confidence of the people in his genuity and dedication to serve, rather than seeing his reelection as a means to exploit.

HURMA also called on the Dullar’s opponents, either in the party or other political parties, to join hands with him in making the Local Government an envious of others in the State and Nigeria at large.

“On behalf of the Human Rights Monitoring Agenda (HURMA), I write to celebrate the Executive Chairman with all elected members of the legislative council and as well the general people of Somolu Local Government, on the re-election of Dullar as the chairman of our Local Government.

“The outcome of the election is a confirmation both of the perfect will of Almighty God and of the irrefutable choice of Somolu Local Government people owing, among other reasons to the fact that your outstanding performance during the last government, reinforce the confidence of the people in your genuity and dedication to serve, rather than a means to exploit.

“Sir, competent and committed leadership is what people care for world over. You are no doubt a model of this kind of leadership and your victory shows that during the last election, the people of Somolu overwhelmingly voted for you with conviction from your past performance and therefore no amount of opposition can contest that mandate.

“Our campaign since the conclusion of the election has been encouraging all political caucuses and factions both within and outside your choice of party, to unite and give all necessary support to your government for the general good of the masses.

“Finally, as a human rights group committed to equity and justice, in its service to humanity with the ultimate objective of ensuring a just society where rule of law reign supreme other than rule of force, we pledge our unreserved support through regular critique and close monitoring in order to ensure a better regime with transparency and accountability to the electorate.

“We shall be willing to meet with your office alongside other elected legislators at your convenience.