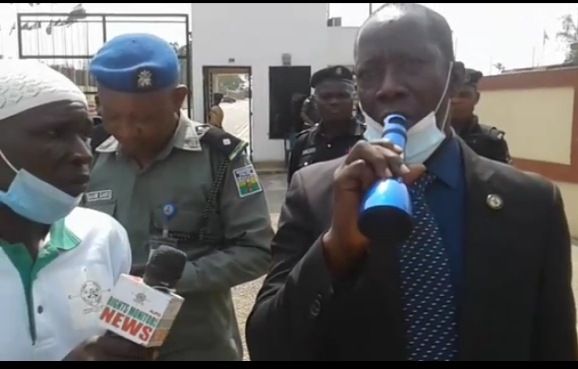 The landlords and residents of Ijegun, Ijedodo and Abule-ado of Iba Local Council Development Area (LCDA), in Alimosho Local Government Area of Lagos State, have invited the State Governor, Mr. Babajide Sanwo-Olu, to their community, to address their plights on their properties, which they said are been threatened, due to proposed road construction in the area.

The concerned landlords and residents of the three communities’ invitation is contained in a letter submitted the governor today, through a human rights group,  Human Rights Monitoring Agenda (HURMA).

The concerned landlords and residents in their letter captioned ‘SOS On Members of Ijegun-Ijedodo-Abule-Addo Communities: Open Letter of Invitation To Governor Sanwo-Olu To Visit The Community. What is Good For the Rich in Magodo Estate is Also Good For the Poor in Ijegun/ Ijedodo Communities’, said the governor’s visit to the communities, just as he recently did to Magodo Estate, will raised their hope that they have a people centered governor in the State.

They also called on Governor Sanwo-Olu to investigate alleged selling of land formerly allotted for the road project, by some Omonile in connivance with some officials of the State. This they said have left the shifting of the project to the genuine land bought by the ordinary people in the area.

A copy of the letter which was by HURMA’s Executive Director, Comrade Buna Olaitan Isiak on behalf of the three communities read: “We hereby chose to use this open medium to invite your excellency to visit and address the plights of the poor landlords of Ijegun/ Ijedodo community members whose properties have been threatened for some times now.

“The promptness by which Your Excellency recently visited and addressed the plight of the elite class whose properties were threatened in Magodo Estate actually raised our hope to the end that we have a people centered governor in Lagos State who will promptly respond to call from the electorates that elected him to power.

“We wish to remind you Sir that HURMA in late last year led a peaceful protest to submit a letter to your office based on a save our soul letter our secretariat received from the people of Ijedodo, Ijegun and Abule-Ado of Iba Local Council Development Area (LCDA), about the intent to illegally and unjustifiably  demolish the houses/properties of the poor, marginalized people by the Lagos State Ministry of Works in collaboration with Omoonile hoodlums and thugs. This continuous act of oppression has claimed the lives of many innocent members of the community. But no response yet from the governor’s office.

“Parts of our legitimate demands in our letters include: (1) That the Lagos state government should stick to the original plan 2010–2020 on Ijegun–Ijedodo-Abule-Ado model city.

(2) That the harassment of the people by the agencies of Lagos State and Omoonile must stop immediately.

(3) That the rich people encroachment on the original plan should be the focus in term of documents verification and not the wretched of the earth who are trying to survive.

(4) The Government must investigate how Omonile sold the land that was meant for road to link Ijegun–Ijedodo–Abule Addo as put in the original plan with some officials of Lagos state government and later shift the road project to genuine land bought by the ordinary people which the government agencies are focusing on illegitimately.

“It is our believe that we have a  governor that is for both the poor and rich class and therefore expect a prompt response from your office”.

Receiving the letter on behalf of the Governor, Mr. Aruna Ayodeji, a Senior  Assistant to the governor on Political Affairs, said the governor’s response to their earlier letter was delayed because of collapse building incident that happened in Ikoyi.

Ayodeji, however assured and promised the concerned landlords and residents of the three communities that Governor Sanwo-Olu will promptly respond to their call, as the governor is for both the poor and the rich.