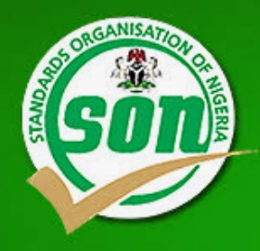 The two men were arraigned before the court presided over by Justice Tijani Ringim, on a three count-charge of conspiracy, forgery and evade to pay service charge of N14,700.

Arraigning the two men, the prosecutor, Yusuf Lawan, a Principal State Counsel of the Federal Ministry of Justice, told the court that both defendants on March 18, 2022, at Olawole Market, Apapa, Lagos, conspired to forge the SON receipt with number, APP/243835, knowing same to be false, and with intent that it may be acted upon as genuine.

The prosecutor also told the court that the first defendant, Isong Michael, allegedly evaded the payment of N14,700 as service charge, payable to the SON.

Both Isong and Ojo pleaded not guilty to the charges.

If found guilty, the defendants risk a maximum sentence of three years’ imprisonment and a fine of not less than N1 Million.

After their pleas were taken, the prosecutor asked the judge, Justice for the defendants to be remanded at the Nigerian Correctional Services (NCoS) acility and for the case file to be remitted to the regular court for trial to fully commence in May after the Easter vacation.

But, defendant’s counsel, MacAnthony Aikharialea, asked the court for a short date for filing and hearing their bail applications during the vacation period which ends on April 22, 2022.

Justice Ringim after listened to both parties adjourned to April 19, for the matter to be heard by another vacation judge, Justice Abimbola Awogboro, and ordered that the defendants be remanded at the Ikoyi facility of NCoS.