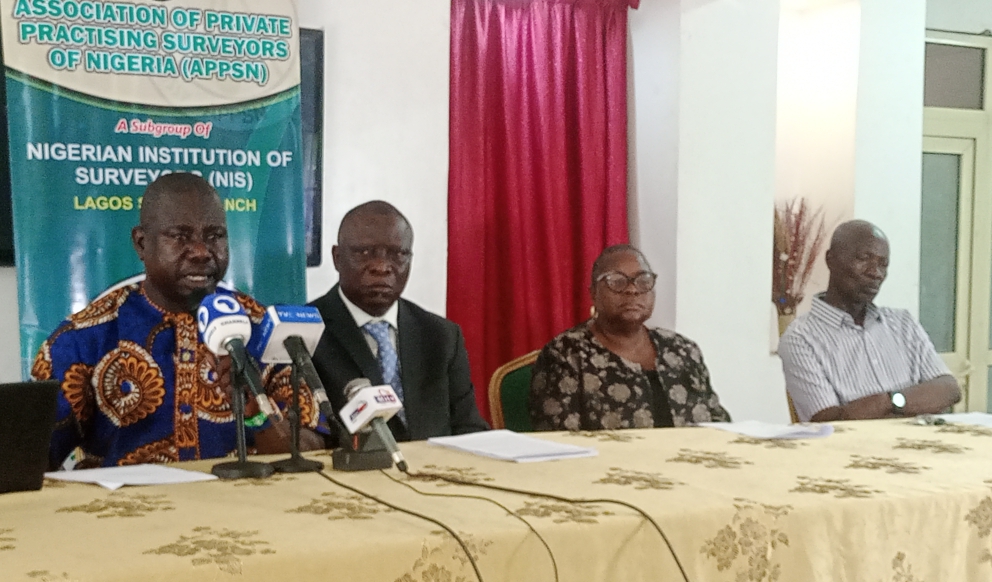 Surveyors in Lagos State, under the auspices of Association of Private Practicing Surveyors of Nigeria (ASPPSN), has promised to file a contempt charge against the Surveyor General of Lagos State, over his failure to implement judgement of the Federal High Court, which nullified Section 5 of the State Survey Practice Law, and granted surveyors to practice the profession in any part of the state without any hindrance.

Speaking on behalf of surveyors area press conference on Friday in Lagos, the chairman of the association, Surveyor Adaranijo Rafiu, stated that a subsisting order of the court must be obeyed by all, no matter how lowly or highly placed in the society.

Surveyor Adaranijo called on the State governor, Mr. Babajide Sanwo-Olu, and the Attorney-General and Commissioner for Justice, Lagos State to call on the State Surveyor-General, to obey the court order and stop controlling Survey Practice in the State.

According to him, Section 19 of the Surveyor Council Of Nigeria (SURCON) Act, gave SURCON exclusive authority to direct activities of all qualified surveyor in the country.

He said “The purpose of this press briefing is to inform the general populace and fellow surveyors all over the country about the judgment delivered by Honourable Justice Daniel Emeka Osiagor of the Federal High Court, Lagos on August 2, 2022, which states that SURCON is the only statutory body that is legally empowered to regulate and control to control the activities of survey Practice in any part of Nigeria, especially Lagos State.

“It is disheartening that more than a month after the Judgement was delivered, Lagos State is yet to comply with the court order, as the Surveyor General of Lagos State continue to refused to accept for lodgement the record copy with Plan No: TOC/0699/06/2022/LA, dated August 10, 2022.

“The court’s pronouncement is unambiguous that SURCON, and not the Surveyor General of Lagos State or any other body is empowered by law to make regulations/guidelines regarding the practice of the profession. This order means that any survey work that is not conducted in compliance with the guidelines of SURCON is/or can be invalidated. Our fellow colleagues need to know this and align moving forward.

“The second pronouncement, which is an expansion of the first, reaffirms the powers of SURCON to regulate and control the survey practice and profession in Nigeria. It states that SURCON has the power to issue the Guidelines for the Conduct of Survey Practice in Nigeria.

“In furtherance of this pronouncement, the Honourable Justice Osiagor ordered that the Office of the State Surveyor General of Lagos be bound to follow and apply the Guideline in Lagos State.

“The SURCON Guidelines for the Conduct of Survey Practice in Nigeria, 2020, came into effect on the 16th of July, 2020. From the guideline and by Section 19 of the SURCON Act, only Surveyors duly registered by SURCON are eligible to practice the survey profession. They are entitled to practice as a surveyor throughout the country without any hindrance, except for those placed on suspension by SURCON.”

Surveyor Adaranijo stated further that: “from the guideline, all survey plans must be lodged with the Office of the Surveyor-General within one month from the completion date of the survey work. And on the matter of Consent to conduct survey work on any parcel of land, whether owned by the Government or not, the court ruled that it is unconstitutional for the Lagos State House of Assembly to enact a law in this regard. By the fourth and fifth pronouncements of the Judgement, Surveyors would no longer need to apply for consent from anyone, including the Surveyor General of the State, before surveying any land, regardless of the status of such land.

“It is essential to let the public know that the survey plan is not a title. It is intended to be a proper description of a parcel of land, and the preparation of a survey plan, which is a critical document in title preparation, does not automatically mean the land has been vested in the person for which the plan has been prepared for.

“SURCON guideline 2020 requires that any Survey records carried out on any parcel of land, irrespective of the client, shall be lodged in the Office of the Surveyor-General. However, going by the order of court, the Surveyor-General of Lagos State lacks the power to reject any survey plans submitted by any registered surveyor for lodgement.

“Also, the court in it judgement, ordered that the Surveyor-General of Lagos State has no power to demand or counter-sign a survey plan prepared by a Registered Surveyor. It is important to stress at this time that although the SURCON has the power to regulate the practice of surveying, its regulation that infringes on the rights of surveyors is a contradiction of the act and, as such, is defective. The guideline of 2020 shed light on the practice without any further contradictions.”######
Owing to the above, the surveyors categorically told the Lagos State government and State Surveyors-General that “no State has power to make laws on Surveying practice and profession in Nigeria, because the SURCON Act and the Regulation is applicable in all the State in Nigeria.

“No Surveyor-General has any right to stop private practising Surveyor from working on any parcel of land in the State, whether owned by the State Government, corporate body or private individual and there must never be any counter signature on any plan again.

“The State Government, offices of the State Surveyors General and the Department of Survey and Mapping, F.C.T, Abuja have no powers to issue any pillar number for Survey work whether Government, Corporate or Privately owned parcel of Land.”

“All plans to be used for title documentation must not be signed by the State Surveyors General, because they are in paid employment. Survey fee are professional fee which are exclusively meant for the Private Practising Surveyors and not to the State Surveyors General or the State Government Account. See Code of Conduct for Public Officers, Part 1, Fifth Schedule of the 1999 Constitution of the Federal Republic of Nigeria; Sections 18 (1)(a) and 20 of the SURCON Act, CAP S18, LFN, 2004.”

The Surveyors further stated that all the States are expected to conform with the contents of the SURCON’s Guidelines.