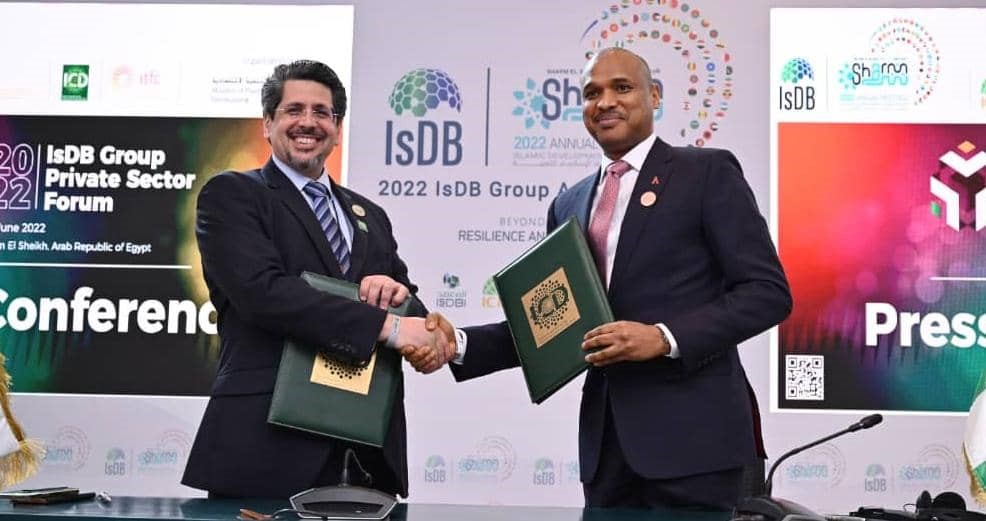 The General Manager and CEO of Islamic Development Bank (IsDB) Group, Mr. Ayman Sejiny in a warm handshake with the Managing Director/CEO of TAJBank Limited, Mr. Hamid Joda; shortly after the signing of the MoU on infrastructure project financing in Nigeria during the IsDB’s Private Sector Forum held in El Sheikh, Egypt recently

TAJBank Limited, Nigeria’s leading non-interest bank, has signed a Memorandum of Understanding (MoU) with the Islamic Corporation for the Development of the Private Sector (ICD), a member of the Islamic Development Bank (IsDB) Group, to attracts funding for major infrastructure projects inNigeria.

The signing of the MOU between TAJBank and the ICD is to express a convergence of will between bothentities and build a relationship between the Nigerian lender and the international organization to explore avenues of financing key capital projects in the Country.

According to the bank’s board, the Sukuk will be offered in tranches of N10 billion each as soon as regulatory approvals are secured.

Speaking on the MOU after the signing, TAJBank’s Managing Director/CEO, Mr. Hamid Joda, said: “We are deeply delighted to have crossed another milestone with the signing of this MOU and especially with the Islamic Corporation for the Development of the Private Sector (ICD), it only further buttresses our intention of stimulating investments in critical sectors of the economy leading to nationaldevelopment.

“As we all know, Nigeria has a huge infrastructure gap that requires funding through long-term funds like that of the ICD.”

In his remarks on the deal, the bank’s Executive Director, Mr. Sherif Idi, also expressed his joy over the development, stressing that the signing of the MoU further demonstrates that “TAJBank is sustaining its giant strides, and this is seen in this partnership as we hope to do more in securing investments that willfurther bring about creation of jobs and production for better national advancement.”

TAJBank, a leading non-interest bank in the country, commenced operations about two years ago andhas accomplished several milestones, including expanding its branch network to 22 within its franchise area during the period.

The non-interest banking services provider had a few days ago unveiled plans to launch a private sectortargeted N100 billion Sukuk programme under a Mudaraba structure that will afford it the opportunity to grow its capital base and by so doing, position it on a strong pedestal to finance large and long-term projects in Nigeria.

The ICD is a multilateral development financial institution under the IsDB saddled with the responsibility of supporting the development of its member-countries through the provision of finance for private sector projects, promoting competition and entrepreneurship and encouraging cross border investments, amongst other key responsibilities.