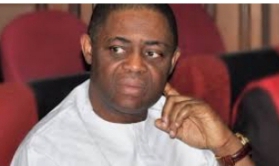 Kubwa General Hospital has said that the former Minister of Aviation, Femi Fani-Kayode, was never a patient in the facility.

The hospital claims, put an end to is put the argument whether or not Fani-Kayode obtained a fake or forged medical report to evade his trial on alleged money laundering charges before a Lagos Federal High Court.

The hospital made the revelation at the trial resumed hearing of charges of alleged forgery of medical documents at the Lagos Special Offences Court, Ikeja.

At the resumed trial of the former Minister, Mr. Bassey Amah, who is the head of medical records at the Kubwa General Hospital, Abuja gave evidence before Justice Olubunmi Abike-Fadipe, stated that Mr. Femi Fani-Kayode was at no time a patient of the hospital.

Amah, while being led in evidence by the Economic and Financial Crimes Commission (EFCC) prosecutor, Mr. Rotimi Oyedepo, said, “Mr. Femi Fani-Kayode does not have a record with Kubwa General Hospital.”

According to him, “On October 3rd, 2021 Kubwa General Hospital received a letter from the EFCC to investigate the authenticity of a medical report on Mr. Femi Fani-Kayode.

“The investigation by the hospitaI revealed that the defendant does not have a record with the facility.

“The document is not authentic.”

As Mr. Oyedepo sought to tender the letter of request by EFCC dated 3rd October 2021 and response to the letter from Kubwa General Hospital dated 13th October, 2021, counsel representing the defendant, Mr. Norrison Quakers (SAN) objected to the admissibility of the documents as evidence.

Mr. Quakers SAN, said the objection is because the witness in the box was not a maker of the document.

He argued, “The witness introduced himself as Bassey Amah, he is not the maker, he can’t even give evidence on the document.

Oyedepo, however, countered him, and said; “the document sought to be tendered is a public document. It emanated from Kubwa General Hospital and the witness in the box has given evidence on oath.

“He has told how they received the document, how it was investigated and how letter was prepared.”

Oyedepo argued further that by virtue of the role the witness played in making of the document, “He is the maker, he can also be described as the maker of the document. It is relevant to the fact of the issue”.

On the contrary, Quaker (SAN) opined that there was nothing on the face of the document linking the witness to the document.

Asking the judge, “In any event, the question your Lordship would ask yourself is could this witness be cross-examined?

He added, “There is a party who executed that document. He is not the maker.

Responding, Justice Abike-Fadipe advised him to argue on the weight of the document.

She added, “I am not going to reject it  because his name is not on it.

Continuing, “If the maker is therefore not called at the end of the trial, I can then determine the weight to attach to the letter.”

Following arguments to discountenance the document, the judge ruled in favour of the EFCC submission.

She said in part, “The letter was issued by the medical Director. The hospital itself can not come to give evidence and can only do so via one of the human personnel.

“I am satisfied that the witness in the box is competent to testify.”

Oyedepo leading the witness on, asked, “Do you know Abdulrazak Jimoh?

He replied “He is a staff of Kubwa General Hospital.

Has your facility issued any other medical report in relation to this defendant?

Again, counsel to the defendant objected on the line of EFCC’s questioning.

The EFCC lawyer, probing the head of medical record department further on what the position of the hospital is, on  exhibits earlier admitted and marked by the judge, the witness continued, “As I said earlier, Mr. Fani-Kayode is not our patient and has no medical report in our hospital.

“The name is not even found there.”

The witness also said the doctor that signed the medical report is not our doctor.”

“The number is not our hospital unit number.

He added that he does not know a certain Tochukwu Eze in the hospital he works as a Chief of Medical Record.

Do you know Dr. Ogieva Oziegbe?

“Yes he was in Kubwa General Hospital.”

Earlier in the proceeding argument and counter argument ensued between both counsel, challenging the court’s jurisdiction.

Further hearing in the matter continues on February, 25, 2022.

The EFCC had dragged the Fani-kayode before the court for alleged forgery on 12-count charge accusing him of forging medical report to mislead the court.

Fani-Kayode was accused of procuring document under false pretence, contrary to the provision of Section 369 of the Criminal Law of Lagos State 2015.

Additional Report By The Casefileng.com