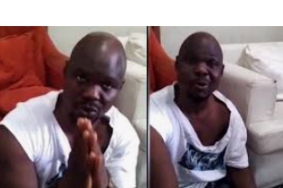 Lawyer to the Actor, Dada Awosika (SAN), had earlier notified the court that a fourth witness would be the last to testify for their side.

The witness, Olukayode Ogunbanjo, alias Pastor Jerosi, while being led in evidence, by co-defence counsel, Kayode Olabiran, told the court that he had worked with Baba Ijesha for over 15 years in the entertainment industry.

“We were like five that used to do the show together. On that date while the show was going on, Princess called on the hot line that she wanted to join our programme.

“There was a day she called Baba Ijesha that he should come over to her place in Iwaya. I drove the car to her house in Iwaya.

“When we got there, Ijesha prostrated to Princess’ mother and the woman said ‘take good care of my daughter’.

“Ijesha at that point revealed to me that he was dating Princess but she was taking the relationship too far,”  the witness said.

Under cross-examination by the Lagos State prosecuting counsel, Yusuf Sule, the witness, however, said he did not have a knowledge of what transpired inside Princess’ house.

“On April 19, 2021, I will be correct to say that you were not at Number 13  Wellbow Street, Iwaya, as a result, you do not know what transpired inside Princess’ house.” Mr Sule asked.

“On  April  19, 2021, I did not know what transpired inside the house as I was in Aguda in Surulere. All I know is what I have said. I was not inside the house. I do not have any knowledge of what happened in the house,” the witness said.

He has pleaded not guilty to the six-count charge.

Upon the close of the defence’ evidence, Justice Taiwo said both counsel should prepare and exchange their final written addresses.

Further hearing has been fixed for June 6 for the adoption of final written addresses.