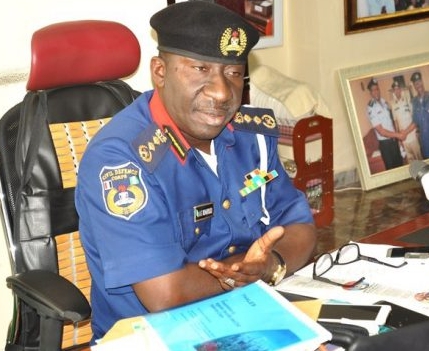 The Commandant General of the Nigeria Security and Civil Defence Corps ‘NSCDC’, Abdullahi Gana Muhammadu, today, dispelled the insinuations by some mischief makers that his tenure which was to end on July 17, 2020 has been extended for 5-years.

A statement issued and made available to newsdishng.com by his media assistant, Ekunola Gbenga, described the rumour as misleading and mischievous, which should be disregarded by the general public.

The statement stated that, though,  President Muhammadu Buhari through Nigeria’s Interior Minister, Mr. Rauf Aregbesola, had approved six months tenure extension, starting from July 17, 2020, which was attributed to Gana’s track record innovative programs of the Corps

“The CG disclosed that it’s true that President Muhammadu Buhari through the honourable Minister of Interior Ogbeni Rauf Aregbesola has approved six months tenure extension ONLY for him with effect from July 17, 2020.

“The Minister graciously recommended this extension of tenure due to the track record of innovative programmes in the Corps as well as the need to consolidate some of the on-going projects.

“While the Commandant-General, Abdullahi Gana Muhammadu appreciates President Buhari for the opportunity given to him and for the able leadership of the minister of interior Ogbeni Rauf Aregbesola, he warned journalists to always verify their information before going to the press”.

“The CG would not be deterred by antics of critics as he had a clear vision of what he wanted to achieve as a CG, stressing that the various projects of his administration are symbolic and would speak to generations yet unborn”.