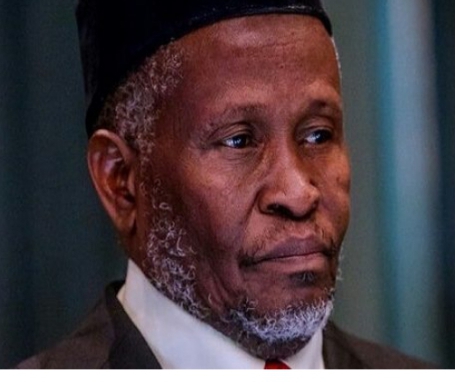 Justice Ibrahim Muhammad, the Chief Justice of Nigeria (CJN), today, met with some officials of the Judiciary Staff Union of Nigeria (JUSUN) on how to mitigate the impact of the ongoing strike on the judiciary.

The Nation newspaper reports that the meeting, which held in the CJN’s office within the Supreme Court complex, Justice Muhammad appealed to the JUSUN members to call off the strike.

The CJN assured efforts would be intensified to ensure that state governments obey the Executive Order 10 and the various court judgements affirming financial autonomy of the judiciary.

Mr.  Ahuraka Isah, Media aide to the CJN, in a statement, quoted Justice Muhammad as noting that: “The unintended sufferers of this strike are better imagined than seen.

“It has spiral effects, including our children, the Federal Judiciary which is a lesser culprit.

“Ordinarily, I would say let me talk to individual 36 state governors, which amount to asking for their favours. But, some of them would ask me to do ten favours in return.

“This is why, as a judge, I am prohibited from asking for favour,” he said.

According to Isah, JUSUN’s delegation to the meeting was led by the National Treasurer, Jimoh Musa.

The President of JUSUN, Marwan Adamu, was said to have been absent from the meeting on account of his involvement in an auto crash while travelling from Kano to attend the meeting in Abuja.

Isah stated Musa promised the CJN that his suggestions would be tabled before the JUSUN’s 19-members National Executive Council (NEC) before a decision is taken.

Musa, he added, said the delegation needed to report to JUSUN’s NEC because only three of the NEC members attended the meeting with the CJN.

He quoted Musa as saying: “We have to table the CJN’s fatherly advice before our NEC meeting and consequently get back to his lordship.”

In pressing for their request ofgetting full autonomy of the third arm of the government, Judiciary, it’s workers under the auspices of Judiciary Staff Union of Nigeria (JUSUN), today embarked on an indefinite strike across the country today.

In ensuring that judicial workers across the country complied with the strike, JUSUN officers visited all courts and evicted it’s staff.

The Activities arrived the Lagos Division of Court of Appeal at about 8.30 a.m, and sent out all workers of the premises before sealing it up. Thereafter, moved to other State court on the island, which includes, State High Courtat TBS, Tinubu Chief Magistrate Courts and did the same thing.

The JUSUN activists, who were civil in their action, arrived the Lagos Federal High Court, Ikoyi, at about 10 a.m and addressed the Court’s Deputy Chief Registrar (DCR), on their visit to the court and urged the DCR to advice the staff of the court to leave the court premises in obedience to the national body directives of the indefinite strike.

Immediately after evicting the Court’s staff, the JUSUN members sung some solidarity songs but did not address the workers on the need to comply with the directives of the national body.
One of the unionists who was approached by this medium of the strike only responded and said: “we have achieved what we were sent here to do. We are not here to make any statement, but to make sure that workers abide by the national body directives and that is to ensure that courtsbusinesses are paralised.
When asked of any likelihood of suspending or call off the strike, one of the unionists said “that is to be determined by the national body of the Union”.

The JUSUN national leadership had in an April 1 circular, ordered the closure of courts across the country as from today, until the government complies with the Constitution, court judgments and other instruments which confer or re-emphasise the financial autonomy of the Judiucary.

The circular signed by its General Secretary, I. M. Adetola, directed all states and zonal heads of the union to comply with the strike.

The union stated that it had at its last National Executive Meeting on March 13, 2021 in Abuja, issued a 21-day ultimatum to the government to implement the financial autonomy of the judiciary with a threat that “failure of which JUSUN will have no other option but to resume the suspended national strike action.”

But on Monday, Nigerian Bar Association (NBA) President Olumide Akpata said it had opened talks with JUSUN on shelving the strike in the public interest.

Additional Report By The Nation Newspaper