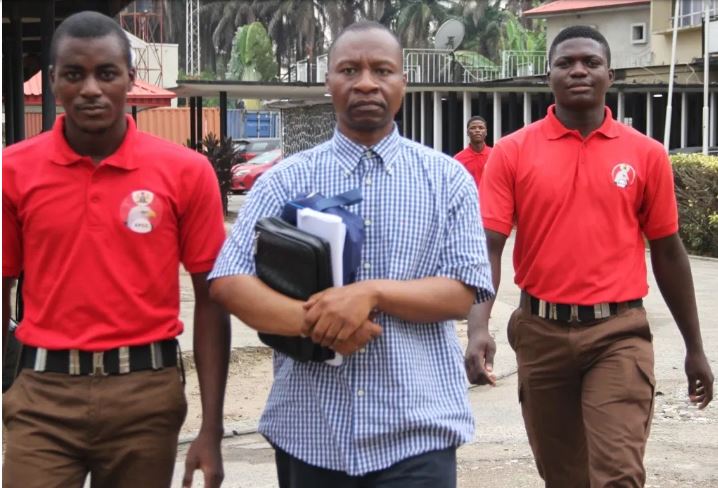 Ayodeji, being Led to Court By EFCC’s Officials, When Previously Charged To Court

An oil marketer, Ayodeji Oluokun has been arraigned before a Special Offences Court sitting in Ikeja, Lagos, over allegedly forged and altering false document.

Justice Sherifat Sholebo who presided over the court, has however, ordered that the oil marketer who is also a pastor, be remanded at the Kirikiru facility of Nigerian Correctional Services (NCS), pending the fulfilment of the bail conditions granted him after pleaded not guilty to the charges.

Ayodeji was arraigned before the court on three counts charge of forgeryby the Economic and Financial Crimes Commission (EFCC).

The anti-graft alleged that the defendant with intent to defraud altered a false document titled, “Resignation from the board of Petroleum Industries Nigeria Limited “dated July 12, 2005.

The prosecution said his offence of making document without authority is contrary to Section 473, 467, 468 of the Criminal Code Cap C17, Lagos State of Nigeria 2003.

Following his plea of not guilty to the charge, prosecution counsel, Mr. M. Ofoma prayed the court for a trial date and asked that the defendant be remand in correctional facility.

In his response, the defendant counsel, Mr Idowu Bolaji pleaded with the court to hear the bail application dated March 2, 2020. The court granted his request following prosecution non opposing the application but urged court to give bail that will make the defendant attend trial.

After listened to the argument of parties on the bail application, Justice Sholebo granted the defendant bail in the sum of N500. 000. 00 with one surety.

Justice Solebo ordered that the surety must be gainfully employ with evidence of three years tax payment to the Lagos State government.

She therefore ordered that the defendant be remanded at the Kirikiri facility of the Nigerian Correctional Services (NCS), till he perfect his bail condition. She subsequently adjourned till April 16, 2020.

Ayodeji is also facing trial before Justice Oluwatoyin Taiwo on the alleged of issuance of dud cheque of $1.6m.

He was said to have approached the Managing Director of GOSL Nigeria Limited, Mr Emmanuel Ekpeyoung for a loan of p $1 million and $666, 666 respectively to enable him carry out operation activities in his company’s oil field in Bayelsa State.

He was said to have assured the complainant that he would repay the money within a year.