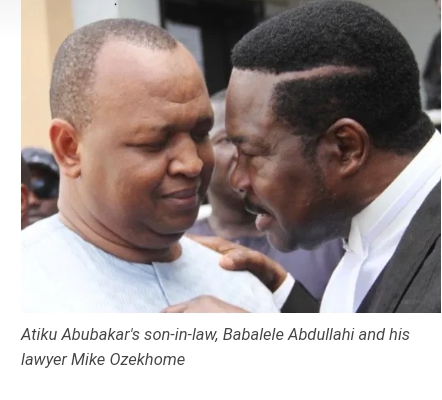 The Economic and Financial Crimes Commission (EFCC) has urged a Lagos Federal High Court, to discountenance the no-case submission, filed by Abdullahi Babalele, a son-in-law to a former Nigeria  Vice President, Alhaji Atiku Abubakar, who is accused of laundering the sum of $140, 000 USD.

Babalele is being tried before the court on a two count-charge of money laundering by the EFCC.

The EFCC had alleged that the defendant, had laundered the said sum on February 20, 2019, with the aid one Bashir Mohammed, a Bureau De Change (BDC) operator, without going through financial institutions.

He was alleged to have given the money to a former president of the country, prior to 2019 General Election.

The defendant  had pleaded not guilty to the charges and accordingly admitted to bail by the court.

During the trial, the EFCC had called two witnesses, as well tendered several documents, which were admitted as exhibits.

At the end of the prosecution’s case, the defendant instead of opening his defence on the allegations, opted for a no-case submission.

At resumed hearing of the matter today, Babalele through its counsel, Mr. Mike Ozekhome (SAN) urged the court to discharge his client of the allegations, as the prosecution, through all evidences given, has not been able to link his client to the commission of the crimes.

Ozekhome (SAN) told the court that the EFCC have not fulfill four elements of section 303 of the Administration of Criminal Justice Act, 2015, of no-case submission, in asking the court to order his client to open his defence.

Consequently, Babalele’s counsel, urged the court to dismiss the charge and discharge and acquit his client of the allegations.

However, counsel to the EFCC, U. U. Buhari, while urging the court to discountenance the no-case submission and order the defendant to open his defence on the charges, said with the two witnesses called and overwhelming evidence before the court, his agency has successful established its case against the defendant.

He urged the court to call on the defendant to open his defence.

Justice Chukwujekwu Aneke, after listened to both parties, adjourned till December 21 2020, for ruling.

Meanwhile, further trial of Mr. Uyiekpen Giwa-Osagie, lawyer to the former Vice President, Alhaji Atiku Abubakar and his brother, Erhunse Giwa-Osagie, who are both standing trial over alleged laundering of the sum of $2 million USD, has been adjourned till December 11, 2020.

The adjournment was at the instance of the EFCC, to enable it respond to a letter said to have been written by Uyiekpen, a senior lawyer in the law firm of Africa Law Practice (ALP), who had asked the commission to review its charges against him.

In asking the court for an adjournment, the EFCC counsel, Mr. U. U. Buhari, said his agency was yet to be through with the defendant’s request. He consequently asked for a short date.

The presiding judge, Justice Aneke, adjourned the matter till December 11, 2020, for further trial.

Both Uyiekpen Giwa-Osagie and his brother, Erhunse, were also arraigned before the court by the EFCC on a three count of of money laundering charge to the tune of $2 million USD.

The Osagie’s brothers were alleged to have committed the offences on February 12, 2019.

They were alleged to have aided each other and made cash payment of $2 million USD, without going through the financial institutions.

They have pleaded not guilty to the charges.