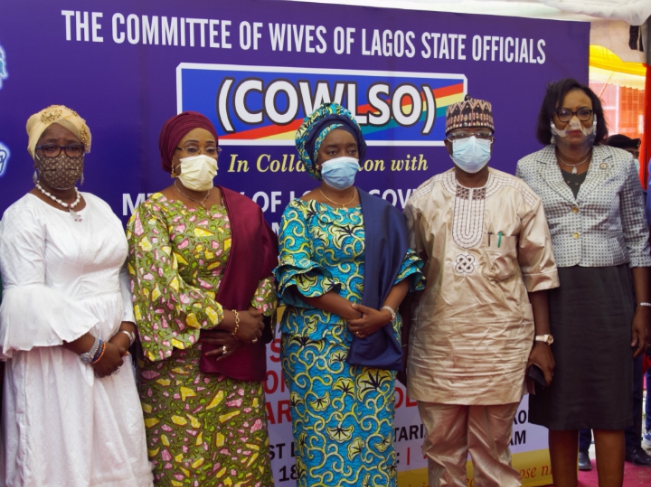 The First Lady and wife of the Lagos State Governor, Dr. Ibijoke Sanwo-Olu on Tuesday, charged market men and women to take charge of the security situation in markets across the state.

She also charged them to ensure proper sanitation of markets in the state for proper hygiene.

A release issued by Mrs. Folashade  Kadiri, a Director of Public Affairs of Ministry of Local Government and Community Affairs, stated that Mrs. Sanwo-Olu, gave the advice at a one-day seminar on market sanitation and security for market leaders, organized by the Committee of Wives of Lagos State Officials (COWLSO), in conjunction with the Ministry of Local Government and Community Affairs, held at the Ikorodu West Local Council Development Area, Owutu.

Mrs (Dr) Sanwo-Olu said security and safety was intentionally included in the seminar because for the first time, security had become everybody’s business and as market men and women and community leaders, they must be conscious of the need to make security a priority.

“When we see something, we must say something. For us in Lagos State, the state of insecurity in Nigeria today has also made it necessary to implement new measures such as ban of commercial motorcycles, popularly known as Okada to sanitize the State and secure our people.

“Security is everyone’s business. Where there’s no law, there’s no offence. Gone are the days when they say Lagos is no man’s land. You cannot go outside the country and throw paper on the floor without consequences”, she stated.

According to Sanwo-Olu, security in the market is paramount and that there must be proper identification of all traders in the market, adding that the Monitoring and Evaluation of security activities in the market must be a daily affair and also in every community.

In her words: “As market men and women, you must take ownership of security of the markets. Like the #Sorosoke Generation, you have to speak up and speak out loud and clear when you suspect any suspicious movement or activity around you, especially the issue of strangers coming to the market to sleep overnight.

“These and many others, including fire outbreaks in the market must be addressed in order to protect the investments of the people, going forward”.

In his Welcome Remarks, Commissioner for Local Government and Community Affairs, Dr. Wale Ahmed, said the timeliness of this seminar could not be undermined, especially after the recent inauguration of Lagos State Market Advisory Council (LASMAC), by Governor Babajide Olusola Sanwo-Olu.

“This, is chiefly one of the efforts of the State Government to make Lagos State a 21st Century Economy and this, no doubt, is a proof that Mr Governor intends to leave no sector or individual behind in achieving the dream of, “A Greater Lagos”.

“In our markets, at various Local Government and LCDAs, and in our communities; men and women of different ethnic and religious leanings, dwell happily together, in peace and cordial atmosphere, pursuing their daily businesses”, he said.

Ahmed stated that much as the government was happy for this and would want the peaceful co-existence to continue, the current security situation in the country required that all paid attention to the smallest detail and be very vigilant.

He said this meant also that market men and women must promptly report to the appropriate government agency any suspicious act, capable of causing a breach of the peace.

“It means also, that we must continue to respect and tolerate one another, recognizing that we are products of different backgrounds and cherished beliefs”, he added.
The Commissioner said the rains are here and that it was time market men and women redouble their efforts at ensuring a consistently clean and healthy market environment.

He stressed that educating market men and women was critical to preventing both pandemics and local outbreaks, saying that its absence would leave all exposed, explaining that when one failed to do the right thing, it would leave them at risk and vulnerable.

The Commissioner for Environment, Mr. Tunji Bello, represented by the Permanent Secretary of the Ministry, Mrs. Belinda Oyeneye, advised market traders to ensure they improve personal hygiene and encouraged them to imbibe the culture of sorting at source, stressing that the, ‘Waste to Wealth Initiative’ by the state government has come to stay.

In his remarks, the Managing Director, Lagos Waste Management Authority, LAWMA, Mr. Ibrahim Odumboni, adjudged Ikorodu division as the cleanest and appealed that traders should shun the use of cart pushers, which has been outlawed in Lagos State.He disclosed that 240 Dino bins are available for placement, stressing that it is very important for traders to find a space within markets for the placement of these bins.

Speaking, Chairman/President General, Lagos State Market Advisory Council (LASMAC), Mrs Folashade Tinubu-Ojo stated that traders should be conscious of their immediate environment by informing security operatives of any suspicious acts that could lead to breach of security. ‘We must be our brothers keepers by reporting any suspicious acts in our neighbourhood’, she stressed.

Facilitators at the seminar, took turns to speak on various topics ranging from; The Role of Market Leaders in Security and Safety in Community Policing; Market Sanitation – An effective Tool for the well-being of traders and General Public; Information Management as a Security Tool in Lagos Open Markets; Fire Prevention and Safety in Markets and Health talk on Prevention Better than Cure’.

Present at the event were; The Ayangburen of Ikorodu, Oba Kabir Shotobi, his counterpart, Sekumade of Ipakodo, Oba Bashir Shotonwa, Local Government Chairmen in the division, market leaders and CDA, CDCs’ Executives.