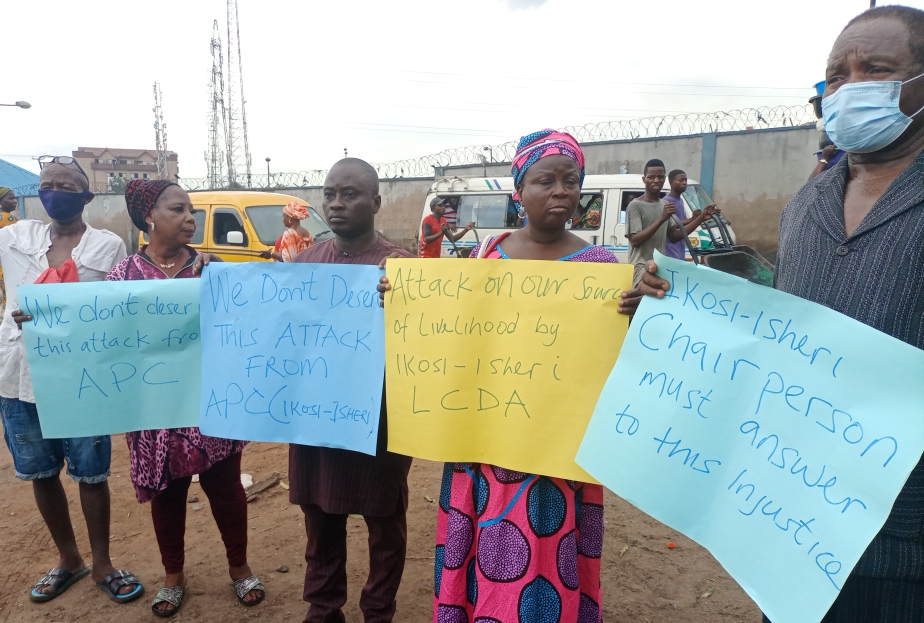 Some of the Displaced Traders During The Protest on Monday

Displaced traders at the Ikosi-Isheri Complex, located at Ketu, Lagos, have called on Lagos State Governor, Mr. Babajide Sanwoolu and member of Lagos State House of Assembly, to come to the rescue over recent demolition of the shops and stalls by the chairperson of Ikosi-Isheri Local Council Development Area (LCDA) Mrs. Simiat Bada.

The traders who protested the demolition on Monday, accused the chairperson of demolishing the complex, without any prior, said the singular act has taken away their livelihood, while some of them have been bedridden due to the shock they have over the sudden demolition of the complex.

Leader of the traders, Mr. Amusa Isiaka, who claimed to have lost two shops to the complex demolition, said they were caught unaware by the developer, named Onyenachi, whom he said claimed to be working for someone.

Amusa said they were surprised when the developer said he has been given the go ahead to redevelop the complex which she said was either defective of been in bad state.

He said: “it all happened in January this year, when we saw some people in the market and told us that someone that is called ‘Onyekachi’ wanted to develop the complex, we asked them that if the complex is to be redeveloped, is it not we that owns it that supposed to develop it? They did not give us any further information.

“As at the time the developer came, the complex was not defective and we always make sure that its clean and tidy.We thought that it was joke, we mobilised ourselves and went to the chairman and told her some people came and told us that they wants to develop the complex.

“She told us to go and promised to talk the people, for that week, there was no message from her. When there was no message from her for that week, we went to the DPO and report the matter. The DPO promised to intervene and we were called for a meeting, the developer said he is on errand and there is nothing he can could and that he has to do as order.

“The developer also said after carrying out the order, we can do whatever we wants to do. And true to the developer’s statement, the next thing we saw was that without notice the complex was brought down”.

Isiaka also said that due to the demolition, some of the traders, especially, the elderly ones have died, some are bed ridden and people like him have been sent to the street.

He calling on the Governor Sanwoolu and members of the State Assembly, to intervene in our case.

Madam Ogunleye said: “we were not informed of the redevelopment on the complex, we just got the information unexpectedly, it’s very sad. This is something I was preparing to live on, for it to be destroyed by someone without notice or information, it’s very sad.

“We want all well-meaning Nigerians to support us to see that we are taking care of and not deprived of our livelihood”Mr. Igabali

Another trader in the complex, who called introduce himself as Mr. Igabali said: “Our complex was demolished without notice by the contractor who claimed to have the permission of the LCDA chairman to develop the complex.

“Our protest today is to let the State government our assembly men and nigerians in general knows the injustice done to us, because proper channels were not follow. We were not given any notice of demolition, no meeting was called, we were not allow to pack our wares, we closed only to come on the second day and see our complex been brought. This is an injustice of high order.

“We did not say that they can’t redevelop the complex, but there must be processes to be followed and they should let us know, there should be agreement that when the development is completed, this is what we are going to give you people.
Since we have been using the place, we have been paying our dues to the LCDA as at when due, we never defaulted in this regard”.

Solicitor to the desplaced traders, Barrister Shakirullahi Obale, also expressed dismay at the attitude of the LCDA for ignoring all letters written by the affected traders.
He said: “my clients, who are the displaced of the traders in the demolished complex have written for letters to the LCDA, none was responded to, the only response we received was from the AG of the State, this is very appalling”.

Obale said if not that the protest by the Judicial workers, the matter would have been in court.

Efforts to speaking with the council boss, Mrs. Abolanle Bada, proved abortive, as one of her aides, Mr. Ayo Idowu, who claimed to be Chief Press Secretary (CPS) said she was indisposed.