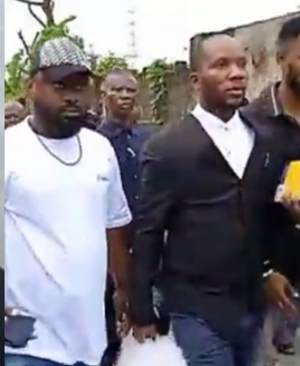 Barrister Inibehe Effiong, After His Release From Custody

Breaking: Inibehe Effiong Out Of Prison After 30-Day Incarceration

The lawyer, who was sentenced to one-month imprisonment, by the Akwa-Ibom Chief Judge, Mrs.Ekaette Obot, regained freedom from the Uyo prison on Friday morning.

The Akwa Ibom Chief Judge Ekaette Obot had on 27 July, sentenced Effiong to 30-day imprisonment, for alleged contempt of court.

He said: “Inibehe Effiong has been released from unjust imprisonment in Uyo, Akwa Ibom state.

Effiong, in a live video monitored by The Nation after his release, was seen walking with supporters chanting “Freedom cometh by struggle”.

Effiong said: “For me, like I’ve always said, history will vindicate the just. Well I’ve just finished my one-month appointment with destiny.

“I came to the custodial centre to follow the path of my ancestors, and those who sacrificed their comfort in order to defend their conviction.

“I consider it an honor to be incarcerated for standing by the truth. I thank the Olumide Akpata-led administration, and other lawyers who fought to vindicate me.”