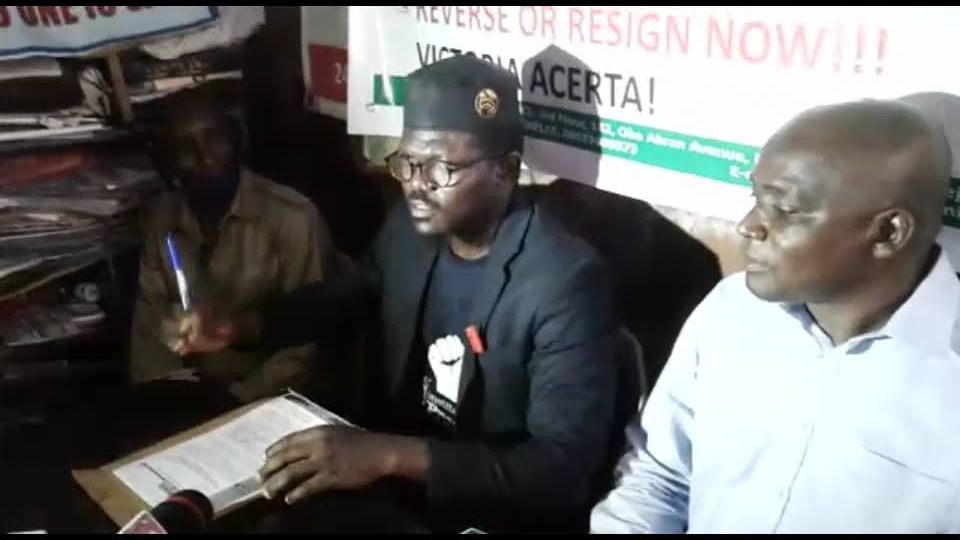 Pic-; (R) Barr. Lekan Alabi, HURMA’s Board Chairman, Com. Isiak Olaitan Buna, HURMA’s Executive Director and A Member Of The Group, During A Press Conference Over Petrol And Others Price Hikes Held In Lagos On Monday.

HURMA Calls For Reversal Of Petrol Price Hike, Others

Human Rights Monitoring Agenda (HURMA) has called on President Muhammadu Buhari to immediately reverse the price of petroleum, electricity and others that were recently increased.

HURMA made the called in Lagos, on Monday, during s press briefing.

Speaking at the event,Barrister Lekan Alabi and Comrade Isiak Buna, HURMA’s Board Chairman and Executive Director, called recent increase of petrom pump pricd of petrol by president Buhari as callous.

A statement jointly signed and read by Barrister Alabi and Comrade Buna reads: “its historical responsibility in  rescuing Nigerians from cut throat economic hardships foisted on us  by brutal and repressive government being led  by Mr. Muhamadu Buhari, hereby calls  the Nigerian People to resist the callous and ungodly increase in petroleum products with attendant spiral inflation of all products and call for immediate reversal of the hike in essential commodities.

“The consequence of failure to reverse the inclement is to mobilize  the masses for  mass action among other civil disobedient options against a heartless government of Mr.  Muhamadu Buhari, who rode to power on trust with the forlorn hope of making Nigeria a state that works for all.

“HURMA in collaboration with other pro people; civilized Society Organisations are not only calling Nigerians to resist all the IMF policies of a dubious government  but also to mobilize all their cells to demand for the  reversal of charges made in the recent times by the current ruling class.

“We enjoin Nigerians to see this “war” of increment on the oppressed as a class war, we do not have a choice than to squarely fight our oppressors in order to get social  economic justice.

“We demand for a remorseful apology from the dominant ruling class party- APC government for lying to the Nigerian people and accept that its government is  failure and fraud.
“Before the emergence of the APC government, Nigerians had relentlessly faced the torture of hard cost of living and regular rise in the price of petroleum products occasioned by  dependent on importation of refined petroleum products to meet our domestic needs, even though we were one of the largest producers and exporters of crude oil in the world.

“This economic scenario is worrisome   because our refineries are moribund and conduit pipes to loot our collective patrimony in what they call Turn Around Maintenance. It is an opprobrium that  Nigeria remained the only member of OPEC that depends mainly on imported refined petroleum products to meet its domestic needs.

“Nigerians were aware of the tendencies of perpetual rise in the oil price due to many realistic factors that include international price of crude oil; cost of refining abroad; cost of importations and landing cost of imported refined products on our shores among others.

“At the height of frustration, the APC through its propaganda machine promised to turn stone to bread if elected by Nigerians as an alternative to the PDP government.

“Nigerians swindled by the rosy promises of heaven on earth by Mr. Integrity when he was massively voted to power  to liberate Nigerians from the clique  that enriched their families,  alas! the current government is a continuation of the disgraced PDP government in terms of policy and programs .

“It is indeed disheartening how Mr. Muhammadu Buhari carelessly lost the false  love and trust Nigerians had in him.  Nigerians expected little from him to provide light, water and other necessaries at little costs, but he failed woefully.Under his integrity coated regime, Nigerians are confronted with anti-people policies of VAT increment, hike in electricity tariff and deliberate devaluation of naira among other hardships on the citizenry despite the wounds already inflicted  on the populace by the COVID-19 global scourge.

“Nigerians are conscious of the fact that the  dubiously fraudulent politicians who wielded the political power only help  themselves with our collective wealth and living obscene life.

“We enjoin the masses of our people to join the struggle in liberating Nigerians from the current stooge of the imperialists who does not have any clear cut economic agenda other than borrowings. Borrowings that have mortgaged our future and the future of generation yet unborn.

“In this struggle, there is no room for sitting on the fence. It is between the people and few oligarchs. The Labour unions and other pro democracy groups must rise to the occasion and be on the people side to demand for total reversal in the hike of petroleum products and other services.

“We have been finally pushed to the wall by oppressors masquerading democratic representation to deceive and destroy the people. We do not have an option but to resist the economic rapists.

“No doubt, in struggle for Nigeria, there is victory”.