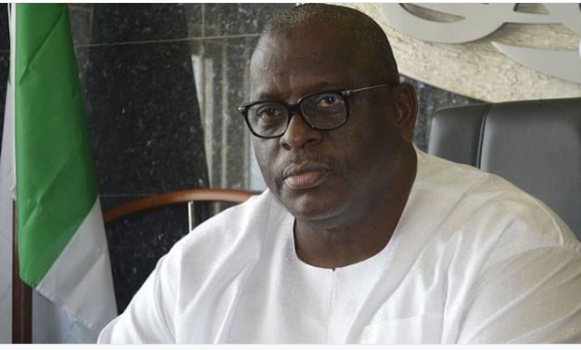 How time flies! So, it has been 365 days since the late Senator Buruji Kashamu left us? He was larger than life. He was big –both in stature and life; and even bigger in death. Say what you want, there is no denying the fact that the late Senator Buruji Kashamu lived his life for others, especially the hoi polloi. Members of his immediate family knew this and lived with this reality until that fateful day – Saturday, the 8th of August, 2020 – when the cold hands of death suddenly snatched him away.

First, it was like a bad dream that many wished would go away. But, as the seconds turned to minutes, and minutes to hours, hours became days, days turned to weeks, weeks to months, it became a shocking reality. Now, it is a whole year without the enigma – our very own Senator Buruji Kashamu!

Few days to the commemoration of the first year memorial of the late Senator Kashamu, death stealthily crept into the family again on Saturday, the 31st of July, 2021 and took away his immediate elder sister, Alhaja Busrat Adenike Shote (nee Kashamu), after a brief illness. This was a woman with whom I had a conversation about how to preserve the legacies of his late brother during the Sallah break. Barely three days after, I heard she was indisposed and was taken to the hospital. Before we knew it, she was gone. Everyone was devastated. But, as believers in the sovereignty of the Almighty God, we take solace in knowing that not even a strand of hair will fall to the ground without His knowledge. She has been buried according to Islamic rites. The 8th day fidau prayer was held yesterday (Saturday, 7th August, 2021). Today (Sunday, 8th August, 2021), it is the one-year remembrance of the Alaanu Mekunu (benefactor of the masses). May grief be far from us all. AMEN!

The late Senator Kashamu was a man of many parts; someone whose name resonated with both the upper-class and the plebeians with equal measure. He meant different things to different people but none could deny his place in the lives and hearts of the poor and less privileged who form the majority of our population as a people. Perhaps, nothing succinctly captures this more than the way the young and old milled around the gate of your house and final resting place during the last Sallah holidays. The Ijebu-Igbo community and its environs, Ogun State, the South West and indeed Nigeria know that an uncommon philanthropist and a political colossus was no more.  Although your son, Rasheed and his cousin, Taiwo Shote, stood in the gap to give out rice, rams and cash gifts to the people, as you would have done in your lifetime even if it was not on the scale you would have done. Yet, they did their best and it is our sincere prayers that the young shall grow to keep alive the legacy of impacting lives in diverse ways; no matter how small.

In the last 365 days, I have missed my late boss’s presence and aura. There was no missing him in any place he went. I have missed his uncommon energy that made me wonder how he got so much strength to stay awake till late in the night and yet the first to wake up, checking up on everyone and everything around him. I have missed having my phones close to the bed in expectation of late night and early morning calls through which he bounced off ideas and sought one’s modest opinions on issues. I missed all the lengthy dictations and readings. I have missed his sense of humour and laughter. I have missed his uncanny native intelligence and ability to recall. I have missed those fleeting moments when his eyes turned red and almost bulged out of their sockets. One moment he is crossed with someone or pissed at a thing; the next moment, he is reeling in laughter with that same person. For him, there was no place for grudges. He had no place for pretence.

As if preparing for eternity, since 2018 and up till he breathed his last, he did everything humanly possible to make peace with all those he had political differences with except for those who remained implacable. He sent emissaries, visited, called and even went on air to declare his readiness to make peace with all those who felt offended by his actions or inactions. He died a man of peace because he was at peace with himself and his creator.

Having worked closely with him for over a decade, I can tell without any equivocation that the void he left in my life has been difficult to fill. In my private moments, balls of hot tears still roll down my brows whenever I reflect on the beautiful working relationship we had; how he appreciated my modest efforts at work; the fatherly love and care that he showed towards me and my family. My wife, Glory, still has fond memories of how jovial he was whenever she had the opportunity to speak with him over the telephone. She flaunts the clothes you gave her and often wondered if there would ever be another Kashamu.

Over the years, the late Senator Kashamu taught me so much. Although he was not a lawyer, he taught me how to handle knotty legal issues. He taught me that in politics, as in life, clarity of mission and sincerity of purpose are germane. And in doing this, everyone does not need to reach a consensus. What matters is to strive for the greatest good for the greatest number of people once you are convinced of a course of action.

The late Senator Kashamu was daring yet focused. He was assailed on all fronts yet a go-getter. He was wealthy yet humble. He was strong yet so tender-hearted. He loved the good things of life yet he did not allow them to divine his essence. That was why he was a generous giver and incomparable philanthropist.

Baba Sheri was an astute businessman. He knew the value of time and money. Even while on his sick bed, he kept a tab on his businesses. He understood that money was a resource that should be wisely invested, rolled over and spent towards generating more money. He did that in the automobile industry. He replicated the same in the property sector as well as in the hospitality and gaming industries.

Still talking about lessons. He taught me how to use the law to my advantage and the advancement of society. Today, the federal government is making so much money from stamp duties. Not many know that this was only made possible by a public-interest action that the late Senator Kashamu instituted against the Central Bank of Nigeria and 22 banks in 2016 through Kasmal International Services Limited (KISL).

Only last week, the Federal Government said it has made provision for the acquisition of a Central Monitoring System (CMS) to ensure transparency and adequately capture the revenue that betting/lottery operators generate.

Again, this was a fallout of a campaign for transparency in the gaming industry that the late Senator Kashamu championed. As a matter of fact, it was during one of his many trips to Abuja on the issue that he took ill and never recovered from. It could be safely said that you breathed your last championing this cause.

In all, one can safely conclude that truly it is not the number of years that one lived that matters but the impact made that counts most. Little wonder America author R.J. Palacio said, “The things we do outlast our mortality. The things we do are like monuments that people build to honour heroes after they’ve died.

They’re like the pyramids that the Egyptians built to honour the pharaohs. Only instead of being made of stone, they’re made out of the memories people have of you.” Dear boss and benefactor, your memories are forever etched not just on the sands of time but upon the table of our hearts. Continue to rest in peace, SPBK!